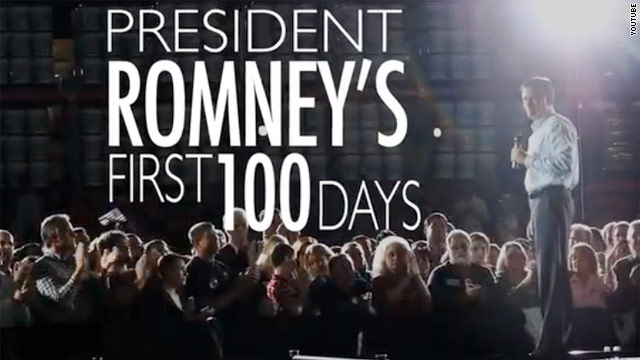 The four-state buy marks the first time the Romney campaign has targeted ads to single states in the general election, and in each spot, local concerns are brought front and center.

The spot airing in Iowa uses a shot of cornfields, and asks: "President Romney's first 100 days. What will they mean for Iowa?"

"President Romney's first 100 days: For the people of Iowa, they mean fewer worries about their future and their children's future," the ad concludes.

Romney's North Carolina ad focuses on the candidate's plan for creating new jobs, honing in specifically on industries with a large presence in the state.

Charlotte, the site of this summer's Democratic National Convention, is America's second-largest banking center, after New York City. The Raleigh-Durham-Chapel Hill Research Triangle is home to large IT and other technology firms.

North Carolina went for Obama in 2008 by a razor-thin margin, and CNN's Electoral Map currently rates the state "leaning Romney."

In Ohio, shots of the Rock and Roll Hall of Fame and manufacturing plants in Cleveland punctuate Romney's economic message.

"Day One, President Romney stands up to China, demands a level playing field for our businesses and workers."

The candidate also pledges to repeal "regulations that are strangling our energy industry and costing us jobs."

Ohio, whose manufacturing base took a hit during the recession, has seen a revival of manufacturing jobs in the last few years, partly due to a newly resurgent American auto industry, and increased foreign demand for steel.

The state, which went for Obama by a narrow margin in 2008, is classified a "toss up" on the CNN Electoral Map.

Romney's final spot, airing in Virginia, goes after energy workers. The spot opens with a shot of Richmond's skyline.

In November, Obama's administration announced plans to open up offshore drilling sites in the Gulf of Mexico and Alaska, but didn't include waters off Virginia in the new measure.

Like the other three states targeted by Romney Friday, Virginia went for Obama in 2008. The CNN Electoral Map currently ranks it a "toss up."