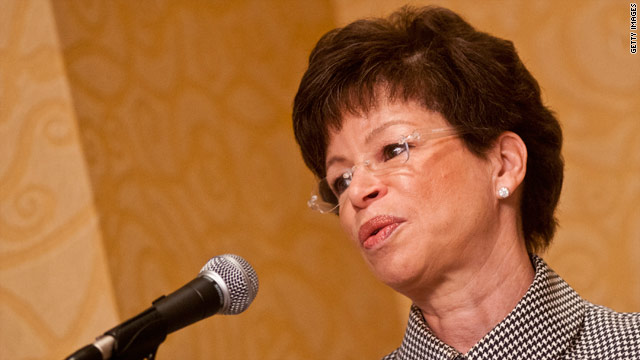 Valerie Jarrett, Obama's senior adviser and close family friend, told a group of black journalists Saturday that the administration is prepared for the court's decision – which could come as early as Monday – then went on to attack Republicans in Congress for what she called a strategy of "no."

Still, she admitted that the administration was out-maneuvered by Republicans in the months following the law's passage, as the other side turned up the drumbeat to repeal what they called "Obamacare."

"The opponents of it out-organized – in terms of the 'death panels' - and distorted what we were doing early on."

She then lashed out at what she called the "obstructionist" GOP members in Congress.

"It's been very disappointing that the Republicans in Congress put politics ahead of the economy," she said. "Their strategy has been to say 'no,' even to the detriment of the American people."

She added: "I think, given how obstructionist the Republicans in Congress were, the president accomplished an enormous amount."

Jarrett, in New Orleans to address the annual convention of the National Association of Black Journalists, spoke for about an hour on a wide range of issues, from health care and immigration to gay marriage and the state of political discourse in the country. Republican presidential candidate Mitt Romney, campaign advisers and GOP representatives were also invited to speak at the event, but declined repeated requests, according to event organizers.

Jarrett reflected on her lowest personal moment working at the White House.

"The lowest low I can tell you was the debt-ceiling debacle (of 2011). It was the time that really crystallized to me that the Republicans were willing to just run the car right off the cliff."

On the president's recent announcement of his support for gay marriage, Jarrett pushed back against criticism that the timing of the decision was less about the issue and more about pure politics.

"He made the decision when he was comfortable making the decision. It was a very personal decision. He couldn't accelerate that process any faster than he did. This was not something he was doing for politically opportunistic reasons," she said.

On Obama's clearly frustrated reaction to being interrupted by a conservative reporter during his White House remarks on immigration, Jarret said, "He's human."

"Does he get frustrated from time to time? Of course he does. He's human. Does he let that frustration linger? He can't afford to. He's president of the United States. He's got to get back to work."

On the current level of political discourse in the country, she pointed to the conversations happening on the internet.

"There is a coarseness to the dialogue, generally," she said. "Look no further than the comments section online to see how coarse our dialogue is getting towards one another."

Jarrett, who is widely seen as Obama's closest adviser and who has known the first couple for more than 20 years – she was even the first to 'vet' Obama when he and Michelle first started dating – said she has no desire to run for elected office, even though she considered a Senate seat after Obama's election in 2008.

"I don't have that appetite, I really don't," she said. "It doesn't get any better than what I'm doing now. Being in the White House is just the most extraordinary experience of my life. It's a good note to end my public service."