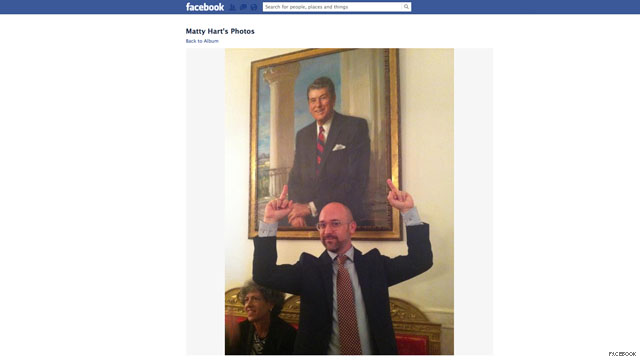 (CNN) - The White House chided two visitors who posed for photographs in the White House while giving the middle finger to a portrait of former President Ronald Reagan.

The guests visited 1600 Pennsylvania Avenue as part of a reception marking gay pride month and the pictures were later included in a Philadelphia Magazine article.

A White House spokesman said such behavior does not belong at the White House.

“While the White house does not control the conduct of guests at receptions, we certainly expect that all attendees conduct themselves in a respectful manner. Most all do," Shin Inouye, a White House spokesman, said. "These individuals clearly did not. Behavior like this doesn’t belong anywhere, least of all in the White House."

According to the Magazine story, the two visitors, photographer Zoe Strauss and Matthew Hart, director for public engagement at Solution for Progress, posted the photos on their Facebook pages.

Hart also included disparaging remarks directed toward the former president on his page.

CNN was not able to reach either subjects, but Hart defended his gesture to the magazine and criticized Reagan for not doing more to prevent the spread of AIDS.