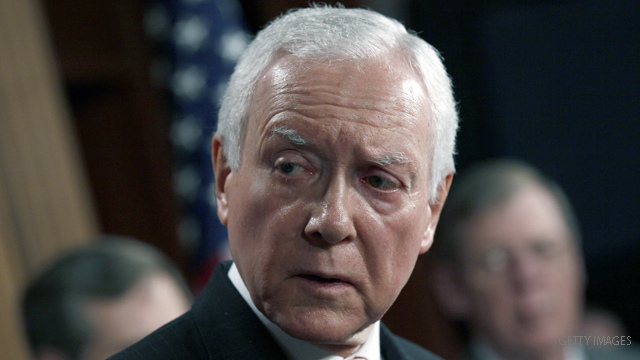 According to a Deseret News/KSL survey, 60% of registered voters in Utah who say they'll vote in the GOP primary back Hatch's bid for a seventh term in the U.S. Senate, with 32% supporting Liljenquist and 7% unsure.

This is Hatch's first primary challenge since winning the Senate seat 36 years ago. Liljenquist forced the primary by coming in second at the state party convention in April, keeping Hatch just under the 60% he needed to avoid a primary showdown. The senator announced earlier this year that if he's re-elected in November, he won't run again for his seat in 2018.

Hatch has a history of reaching across the aisle to work with Democrats, which obviously does not sit well with many tea party activists and other grassroots conservatives. But Hatch has taken steps since the 2010 midterm elections to fight that criticism by highlighting his conservative chops, like leading the Senate GOP push for a balanced budget amendment and co-sponsoring a Republican amendment to repeal President Barack Obama's health care law.

Two years ago, tea party activists and fiscal conservatives were instrumental in helping oust longtime Utah Sen. Bob Bennett at the state party convention. Bennett finished third and the top two candidates faced off in a primary. In the June primary, tea party-backed Mike Lee won the nomination over his opponent, Tim Bridgewater, and ultimately took the seat in the November general election.

The Deseret News/KSL poll, released late Sunday, was conducted between June 15 and June 21 by Dan Jones and Associates, with 737 likely Utah GOP primary voters questioned by telephone. The survey's overall sampling error is plus or minus 3.6 percentage points.