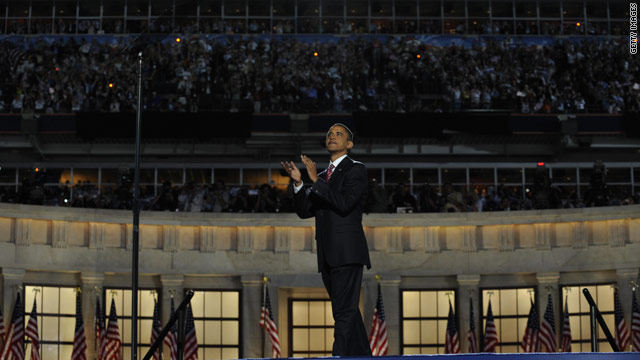 BREAKING… ANOTHER RSVP READS “NO THANK YOU”: Sen. Claire McCaskill of Missouri, key ally to Barack Obama and one of the first U.S. Senators to endorse him in January 2008, will not attend the Democratic National Convention this summer, becoming the latest in her party to do so. McCaskill was first elected to the U.S. Senate in 2006 and faces a tough re-election fight in November. “Generally speaking, Claire has not gone to the National Convention when she is on the ballot because she believes it's important to spend as much time as possible in the state of Missouri talking with voters,” an aide to the first-term Democrat told CNN’s Paul Steinhauser.

"I will be the first president in modern history to be outspent in his re-election campaign, if things continue as they have so far,"

– President Barack Obama, in an email to supporters, today

While you were sleeping, Pres. Obama started defining expectations down.

First, he got beat in fundraising in May – despite a month of high profile moves that many on the president’s team crowed about as fund-raising juggernauts, most notably a “record breaking” fund-raising dinner at George Clooney’s house and taking a public position in support of same sex marriage – and framing it at as a civil rights fight.

Next, his party and his labor allies took a beating on the ground in Wisconsin by the three pillars that were supposed to be his strong suit: demographics, dollars, and ground game. Yet, they lost. Big. Again. In a state that really likes the president.

And last night, President Obama’s convention team cancelled the ambitious plans for a Labor Day event at the Charlotte Motor Speedway, a venue with seating capacity of 140,000 – and instead the DNC is moving it to uptown Charlotte.

Take 2008: Where Barack Obama stood in the center of Invesco Field to accept the nomination in a rollicking Matrix-like-scene of international millennials on the poetic anniversary of Martin Luther King Jr.’s “I have a dream” speech. Obama ended up winning his convention state of Colorado, 53% to 45% - despite it being a red state four years before.

Now to 2012: Barack Obama’s convention will be held at “Time Warner Cable Arena, the Charlotte Convention Center, and Bank of America Stadium” in a state he is currently projected to lose.

And what about all the celebrity attendance and millennial buzz this go around? MTV scheduled its vaulted celebrity-laden Video Music Awards the same night as Barack Obama’s acceptance speech – but they chose the blue state of California for its venue.

Leading Politico: John Roberts's big moment
Chief Justice John Roberts pledged during his Supreme Court hearings to be a mere umpire of the law. But as a legacy-defining decision nears, Roberts is emerging as the court’s most intriguing player. – Josh Gerstein LINK

- Regardless of SCOTUS, Romney says Obamacare will be gone -
MITT ROMNEY AT A CAMPAIGN EVENT IN SALEM, VIRGINIA: “As you know, the Supreme Court is going to be dealing with whether or not Obamacare is constitutional. If it is not – if Obamacare is not deemed constitutional - then the first three and a half years of this president’s term would have been wasted on something that has not helped the American people. If it is deemed to stand, then I’ll tell you one thing we are going to have to have a president, and I am that one, that is going to get rid of Obamacare and we are going to stop it on day one.”

- Cornyn hints at congressional investigation into Holder, administration -
SEN. JOHN CORNYN, R-TEXAS, AT A NEWS CONFERENCE ON CAPITOL HILL: “If in fact Attorney General Holder and the administration continue to promote this pretense of independent investigation, my hope is that Congress will take up the responsibility to do what is constitutionally authorized and obligated to do and that is to investigate this matter ourselves.”

- Gut Check is partial to Sen. Macy “GE” Alcoa -
CONAN O’BRIEN JOKED ABOUT THE SUPREME COURT ON HIS LATE NIGHT TALK SHOW: “The Supreme Court has made a lot of decisions today. The Supreme Court has affirmed that corporations can spend as much money on political campaigns as they want. That's the ruling, yeah. You don't like it, but this decision was praised by Sen. Chevron P. Mountain Dew.”

He was co-author of the Smoot-Hawley Tariff Act of 1930, a generally unsuccessful Great Depression-era protectionism measure designed to protect U.S. farmers from foreign imports that instead sparked retaliation from trade partners.

This Republican was first elected by the Utah’s legislature, which chose senators before ratification of the 17th Amendment. He then was popularly elected.

Smoot lost his bid for a sixth term in 1932 and in retirement served in the Church of Jesus Christ of Latter-day Saints.

He is second to Sen. Orrin Hatch, who is in a contested primary for his seventh term.

Congratulations to veteran winner Jason Warner (@JasonEWarner). Seriously Jason, want to give someone else a chance?