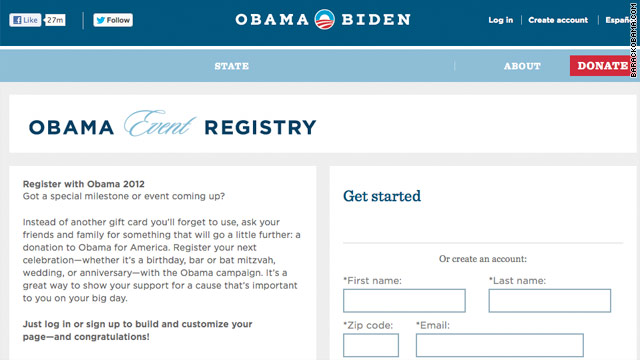 Fill the campaign coffers not the china cabinet

Washington (CNN) - In a sign of three seasons – campaign, wedding and graduation – President Barack Obama's campaign launched a new fund-raising tool this week allowing supporters to set up a gift registry to solicit donations to the president's reelection campaign.

After signing up for a registry, the bride-to-be or college graduate is asked to set a fund-raising goal, name their registry and a personal message to possible gift givers. The page then allows you to share it with friends via email, Facebook and Twitter.

"Got a birthday, anniversary, or wedding coming up? Let your friends know how important this election is to you-register with Obama 2012, and ask for a donation in lieu of a gift," reads the campaign website. "It's a great way to support the President on your big day. Plus, it's a gift that we can all appreciate-and goes a lot further than a gravy bowl."

The fund-raising option has become the butt of many jokes.

"If you're a supporter, you tell your loved ones instead of giving you a gift, you'd like them to donate money to the Obama campaign which is a great way for people to lie about getting you a present," said Jimmy Kimmel on his late night talk show. "On the website it says, quote, a campaign donation goes a lot farther than a gravy bowl. Not if you like gravy, it doesn't. Without a gravy bowl, where else do I keep my gravy?"

But comics are not the only people calling out the Obama campaign.

"Is this what the office of the President of the United States has come to? Pandering for wedding and birthday money," questioned Richard Henkle in the comment section of the campaign's announcement. So far, the announcement has received almost 1,400 comments.

"My six-year-old just lost a lower incisor," Todd Aglialoro joked about the program. "He's going to be so excited when the tooth fairy leaves him an Obama-Biden donation receipt in his name!"

Through May, the Obama campaign has out-raised the presumptive Republican nominee Mitt Romney's campaign $261 million to $123 million.

The tide in fund-raising, however, may be turning. In May alone the Romney campaign raised $77 million to the Obama campaign's $60 million. This was the first time Romney's haul had surpassed Obama's in a given month.

But these monthly numbers pale in comparison to the final amounts that both campaigns hope to raise.

Senior advisers to Obama's campaign told reporters last Friday that they foresee Romney raising over $1 billion this year – and possibly $100 million this month.

That follows months of rumors that Obama, who raised $778 million last cycle, might hit $1 billion for his re-election bid – something his campaign advisers have rejected.