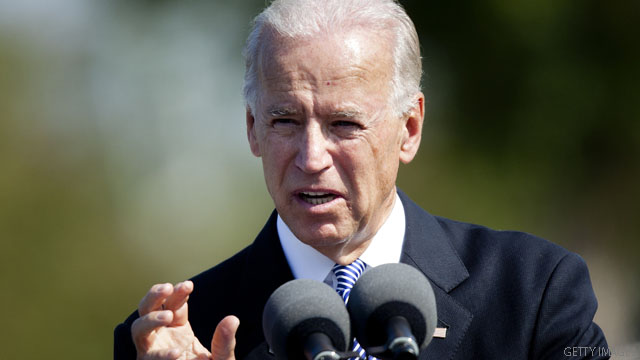 Dubuque, Iowa (CNN) – Less than 24 hours before the U.S. Supreme Court hands down its most closely watched decision in years, Vice President Joe Biden offered a grim projection of Mitt Romney's choices to fill vacancies on the bench.

"Close your eyes and picture what the Supreme Court would look like four years from now under Romney," Biden said to groans from a crowd of supporters at a rally in Dubuque. "Tell me what you think would happen to women's rights in this country, civil rights."

Four members of the Supreme Court are in their seventies – Stephen Breyer is 73, Anthony Kennedy is 75, Antonin Scalia is 76 and Ruth Bader Ginsburg is 79. Plans for Supreme Court resignations, however, are closely guarded and rarely revealed ahead of presidential elections.

On Thursday, the high court will issue a decision on the constitutionality of President Barack Obama's health care law, one of the incumbent Democrat's key legislative achievements during his first three years in office. Republicans, including the presumptive GOP nominee Mitt Romney, argue the law's individual mandate for Americans to purchase health insurance is an overstep of the federal government.

In Iowa Wednesday, Biden once again slammed Romney's record as a private equity executive, as he did Tuesday in Waterloo, saying his rival was presenting a failed business record as his qualification for the White House.

"He said being a businessman is what gives him a great understanding, and I'm paraphrasing, of what it takes to bring back jobs to the United States," Biden said. "But like so many other things the governor says, what he talks about, there's a huge disconnect between what he says, and what he means, and what he's done."

Team Romney called the article a "fundamentally flawed story," arguing it fails to point out the difference between "domestic outsourcing versus offshoring."

Biden mocked that response Wednesday, saying the distinction between offshoring and outsourcing would provide little comfort to out of work Americans.

"If you're looking for work, that's a pretty cruel joke," Biden said. "I can picture one guy says to another in the unemployment line: 'Did you get outsourced or did you get offshored? Which happened to you?' You think it matters to the American worker, to the community? Either way, Mitt Romney helped, and by his response acknowledged he helped take companies take work that was being done – or could have been done – in the United States, and sent it overseas."

"Vice President Biden today continued his misleading attacks on free enterprise and doubled down on the failed policies that have Democrats fleeing from this summer's convention," Romney campaign spokesman Ryan Williams wrote, referring to a recent spate of Democratic politicians announcing they would not attend the Democratic National Convention in Charlotte.

Williams continued, writing: "The Obama Administration has no new ideas to help the middle-class or the millions of Americans suffering from chronic unemployment, so the President and his allies will keep trying to distract attention from the economy. Americans deserve better."

Biden said in Iowa that Romney's top-down economic plan would hurt growth, saying the focus should instead be on helping the middle class.