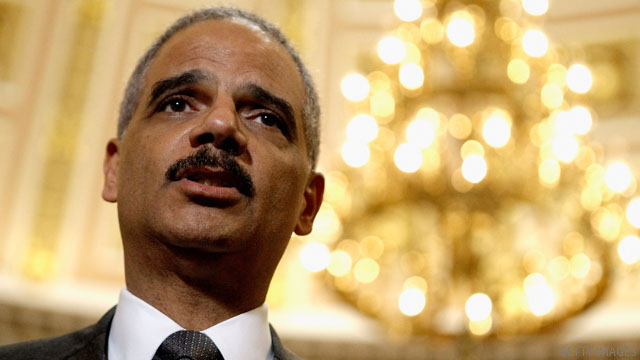 BREAKING… HOLDER FOUND IN CONTEMPT: The House of Representatives voted 255-67 Thursday to hold Attorney General Eric Holder in criminal contempt for refusing to turn over documents related to the Fast and Furious gun-running sting.

“Today’s vote is the regrettable culmination of what has become a misguided and politically motivated investigation over an election year,” Holder said in a press conference following the vote. “By advancing it over the past year in a half, Congressman Issa and others have focused on politics over public safety. Instead of trying to find ways to improve law enforcement.... they have led us to this unnecessary and regrettable outcome.”

Around 10:20 a.m. ET… Mood in the White House – “elation”: Kathy Ruemmler, the White House counsel, informed President Obama, who was watching cable news initially report that the individual mandate had been overturned, that the Affordable Care Act was upheld by the court. They really did not know what was going to happen, a source tells CNN’s Jessica Yellin. They are bit surprised Roberts ruled to uphold but not Justice Anthony Kennedy, the source told Yellin. The only word for the mood, they said, was elation.

11:42 a.m. ET… Mitt Romney delivers remarks with the sparkling Capitol behind him: “Let's make clear that we understand what the court did and did not do. ... What the court did today was say that Obamacare does not violate the Constitution. What they did not do was say that Obamacare was good law or that it's good policy. Obamacare was bad policy yesterday, it's bad policy today. Obamacare was bad law yesterday, it's bad law today. … If we want to get rid of Obamacare, we're going to have to replace President Obama. My mission is to make sure we do exactly that.”

12:20 p.m. ET… President Obama steps to the podium: “That's why even though I knew it wouldn't be politically popular and resisted the idea when I ran for this office, we ultimately included a provision in the Affordable Care Act that people who can afford to buy health insurance should take the responsibility to do so. In fact, this idea has enjoyed support from members of both parties including the current Republican nominee for president. Still I know the debate over this law has been divisive. I respect the very real concerns that millions of Americans have shared. And I know that a lot of coverage through this health care has focus on what it means politically. Well it should be pretty clear by now that I didn't do this because it's good politics, I did it because I believed it was good for the country. I did it because I believed it was good for the American people.”

TRAIL TRIVIA
(Answer below)
Who described the Supreme Court as “seriously hamstringing the peace forces in our society and strengthening the criminal forces”?

One-thousand-two-hundred-twenty days after President Obama told the nation in his State of the Union address, "We can no longer afford to put health care reform on hold," a chief justice who Obama did note vote for when he was a senator gave the president's historic legislation constitutional blessing to proceed.

Ninety-three days after being ridiculed for his fumbling, nervous presentation of oral arguments in front of sharp questioning from the bench, U.S. Solicitor General Donald B. Verrilli wins the biggest case of his boss' presidency. And he did so by publicly contradicting his boss.

While Obama repeatedly stressed that the health care mandate did not constitute a "tax" - insofar as telling ABC News "he rejected that notion," the Supreme Court was swayed by that notion specifically.

Thus along with the historic policy win comes a potentially debilitating political albatross.

The Republicans were quick to jump on the fact that they can now add a Supreme Court endorsed "tax" increase label to the American Care Act - a label even more polarizing than the once shunned, now embraced label of "Obamacare."

The fine print is key in that the "tax" that it refers to is for only those who do not have health insurance - a minority of Americans, and of voters.

Nonetheless, even after what CMAG calculates as $235 million in negative ads about the health care bill since its enactment in 2010, a new battle for message dominance has begun. With 131 days until the election, you get to decide whose message wins.

The facts behind the "tax" in the health care act: For your edification, CNN's Jeanne Sahadi broke down what this "tax" is: "Starting in 2014, individuals must be insured or pay a penalty. The amount of the penalty rises annually from 2014 to 2016 and is adjusted for inflation thereafter.

Leading HuffPo: Time For Plan B: 'Replace President Obama'
Speaking on Capitol Hill shortly after the Supreme Court's historic decision, GOP presidential candidate Mitt Romney said the fact that health care reform was upheld as constitutional on Thursday makes it more urgent than ever for the American people to vote President Barack Obama out of office in November. – Amanda Terkel

Leading Politico: SCOTUS ruling shakes up 2012 race
The Supreme Court’s stunning vindication of President Barack Obama’s health care law represents a huge victory for the president and a morale boost for his battered campaign in the short term — but it’s one with unpredictable consequences on the 2012 presidential election. Glenn Thrush and Maggie Haberman

- The opinion team Romney doesn't want you to read -
SUPREME COURT JUSTICE RUTH BADER GINSBURG IN HER CONCURRING OPINION: “Massachusetts, Congress was told, cracked the adverse selection problem. By requiring most residents to obtain insurance … the Commonwealth ensured that insurers would not be left with only the sick as customers. As a result, federal lawmakers observed, Massachusetts succeeded where other states had failed. … In coupling the minimum coverage provision with guaranteed issue and community-rating prescriptions, Congress followed Massachusetts’ lead.”

–Boehner uses broccoli argument -
SPEAKER OF THE HOUSE JOHN BOEHNER IN CAPITOL HILL PRESS CONFERENCE: “The government could decide that we are going to tax you if you don’t eat broccoli on Tuesday. Apparently now that is constitutional but I don’t think it is a very wise law.”

Republican candidate Richard Nixon made the court's 15-year record of "liberal" decisions under Chief Justice Earl Warren a big "law and order" campaign theme in his 1968 campaign. Nixon said those rulings were "seriously hamstringing the peace forces in our society and strengthening the criminal forces."

The subsequent elections of Ronald Reagan (who nominated three justices) and George H.W. Bush (who nominated two) also helped move the federal judiciary to the right for decades.