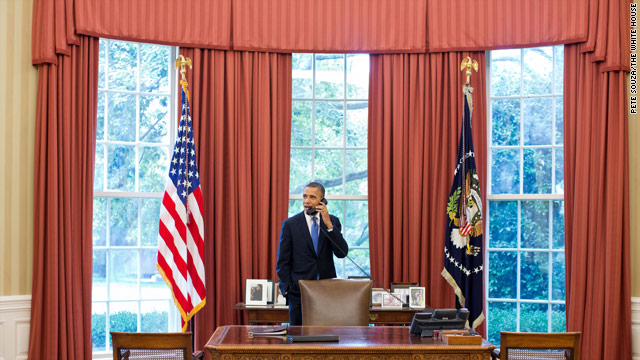 After first learning, from a TV with four split screens, that the individual mandate section of the law was struck down, the president waited on word from his staff.

White House Counsel Kathy Ruemmler entered the "outer Oval Office" to give him two thumbs up, which prompted a quizzical look from the president given what he saw reported on two cable television stations, CNN and Fox News.

Ruemmler told him the news, which she learned from reading the website SCOTUSBlog and a White House lawyer inside the high court, and enthusiasm ensued, according to the officials. She told the president the Affordable Care Act was upheld, with five justices finding it valid under Congress' taxing power.

Displaying a smile, the president hugged Ruemmler. The top White House lawyer returned to her office, by which point the news stations had corrected their reporting, and returned to the Oval Office within the hour to deliver a more complete read on the ruling to the president.

Obama's first call was to Solicitor General Donald Verrilli, who argued the case for the administration, to congratulate him.