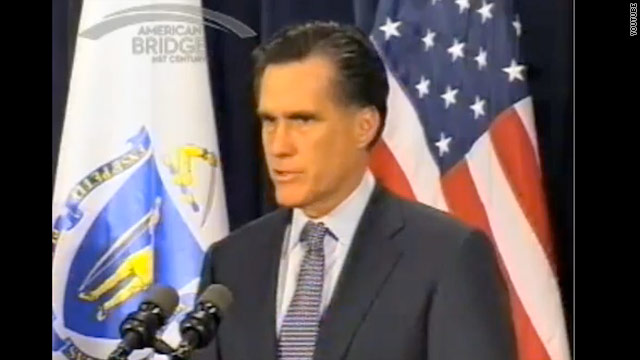 (CNN) - On the same day the Supreme Court announced its decision to uphold the health care law, a Democratic opposition research group is pushing a video from 2006 that shows Mitt Romney praising the idea of an individual insurance mandate–a key component of the Affordable Care Act that he now chastises.

As former governor of Massachusetts, Romney signed off on a law requiring individuals to purchase health insurance. Romney's opponents now point to the law as a way to paint the presidential candidate as hypocritical when he blasts President Barack Obama's sweeping health care reform, which also includes a mandate.

Late Wednesday night, on the eve of the high court's announcement, the Democratic group American Bridge 21st Century blasted out the six-year-old video, a VHS tape they said they "just found" in the Massachusetts state archives.

In his defense, Romney now says the Massachusetts health care law was designed for that state–and that state only. He staunchly opposes the notion of a federal mandate and repeatedly says he would repeal "Obamacare" on his first day in office.

Romney's campaign did not immediately respond to requests for comment on the video.