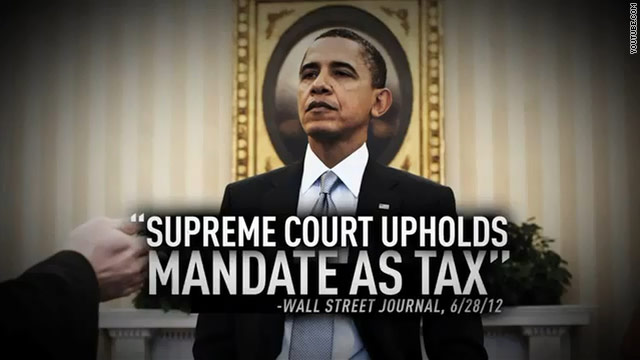 The court ruled that the fee that individuals who are required to but do not obtain health insurance would pay is constitutional and a tax, prompting a new outcry from Republicans and providing the basis for Crossroads' new advertisement.

The ad, and other Republican's statements, point to instances of Obama saying the health reform law would not mean a tax increase.

Crossroads - one of a pair of big-spending conservative organizations founded by GOP strategist Karl Rove - said the ad is a six-figure buy and will air for approximately a week, starting Saturday.

A memo released by the group on Thursday said, "Obama and Democrats now own an issue that is popular only with a small minority of partisans and ideologues, and which is wildly unpopular with older Americans and independent voters with high propensities to vote."

The first poll taken after the Supreme Court's Thursday ruling found the public divided on the outcome. The USA Today/Gallup poll had 46% in agreement with, and 46% opposed to, the ruling.

Romney's campaign also announced a new ad on Friday. This $630,000 buy will be their first general election spot in the key battleground of Florida, and features an ad using then presidential candidate Hillary Clinton’s criticism of Obama.