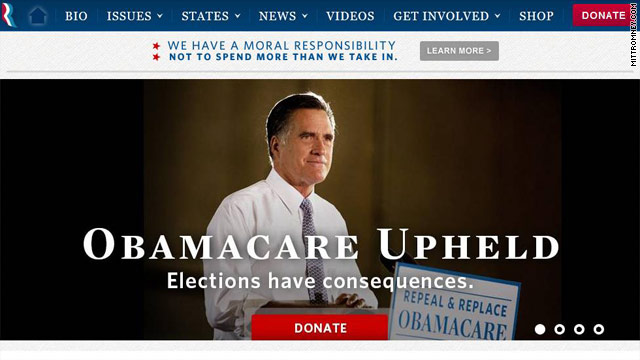 The Romney fund-raising figure included money from more than 47,000 contributions in the first 24 hours, the candidate's spokeswoman Andrea Saul said.

Obama's campaign wouldn't reveal specific fund-raising numbers when asked, saying Friday their opponent's hour-by-hour updates were "perverse." They did assert, however, that their donations surpassed the Romney effort.

"It's perverse that Mitt Romney won't share details about what he'd do for the millions he'd leave uninsured or at the whims of insurance companies when he 'kills Obamacare dead,' but he'll share the hourly details of his fundraising after the Supreme Court ruling," Obama campaign press secretary Ben LaBolt wrote. "We've outraised the Romney campaign in that time period but that's not the point – our supporters are more committed than ever to ensuring that insurance companies can't drop coverage for people who get sick or discriminate against people with preexisting conditions by reelecting the President."

The Romney campaign's Friday announcement marked a significant jump from Thursday night, when the campaign reported pulling in $3.2 million from 26,000 contributors.

Both Romney and Obama used Thursday's Supreme Court ruling on health care to solicit funds from donors, each spinning the landmark decision as an appeal for campaign cash.

Romney's campaign changed the homepage of their website to reflect the court's decision, writing "Obamacare Upheld: Elections have consequences" over a photo of the Republican candidate. Underneath the image was a large red "DONATE" button.

The campaign also emailed and sent text messages to supporters asking for campaign contributions. In one, Romney wrote: "Our basic liberties are at stake – and I will fight to restore our freedoms, renew the respect for our Constitution, and halt the government takeover of health care. This November it's all on the line. The stakes couldn't be higher. Donate $10 or more to put a stop to the policies of Barack Obama and the liberal Democrats."

A text message from Romney read: "If we want to get rid of Obamacare, we're going to have to replace President Obama."

The Romney campaign said earlier this month it had raised $76 million in May along with Romney Victory, a joint fund-raising effort with the Republican National Committee. That averages about $2.5 million per day, though the bulk of the organization's May fund-raising came at large donor events, not from small supporters, as happened Thursday.

Donations to the Romney Victory Fund are divided between Romney's campaign, the Republican National Committee and several state Republican parties.

Earlier in the day, Romney campaign spokeswoman Andrea Saul noted the uptick in donations, marking on Twitter when the campaign hit the $100,000 mark minutes after the ruling was handed down.

Democrats also jumped in on the fund-raising action Thursday, following up the court's decisions with emails to supporters applauding the ruling.

Rep. Steve Israel, chairman of the Democratic Congressional Campaign Committee, wrote in his appeal: "Republicans threw everything they had at us, and they lost. With you standing with us, we can carry this momentum into November and win a Democratic majority to keep making progress. Please donate $3 or whatever you can right now."

"It's been a good day. But this is a three-step process: 1. Pass historic health care reform. Check. 2. Get affirmation from the highest court in the country. Check," he wrote. "Step three? Win the damn election."

Obama himself sent an e-mail to supporters, though it only asked recipients to add their name to his supporter database rather than solicit funds.

"While the Supreme Court's decision should put to rest the debate over health care, Mitt Romney and the Republicans in Congress just can't take yes for an answer," Obama wrote. "My opponent said a short while ago that the first thing he would try to do as president is repeal the health care law. We can't allow that to happen. So we have to win this election."