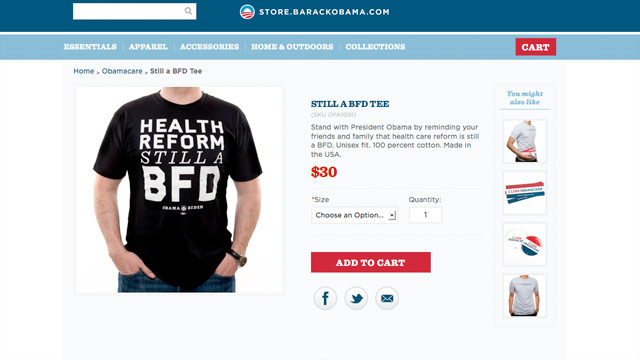 (CNN) - An adviser for Mitt Romney took a shot Friday at the president's re-election campaign, Obama For America (OFA), over a t-shirt it's selling online about the Supreme Court's decision to uphold the federal health care law.

The three-letter term has nearly reached household status ever since Vice President Joe Biden was caught on mic telling the president in 2010 that the health care legislation was a "big f***ing deal."

Biden, in a fit of nostalgia, poked fun at the two-year-old moment Thursday afternoon and posted on Twitter: "Today's decision is a really big – important – deal."

Now, in an effort to fund-raise off of the Supreme Court's decision Thursday, the Obama campaign is also bringing back the "BFD" with the t-shirt, which sells for $30.

However, Romney adviser Eric Fehrnstrom wasted no time in calling out his rival campaign for what he described as un-presidential behavior.
"Still not presidential. Kids, earmuffs," he wrote.

A Democratic leader faced similar criticism Thursday after posting an off-color tweet immediately after the health care decision was announced.

While he followed it up with semi-apology, saying he let his excitement get the best of him, Gaspard's tweet nonetheless went viral and sparked criticism over his spiking-the-ball approach.