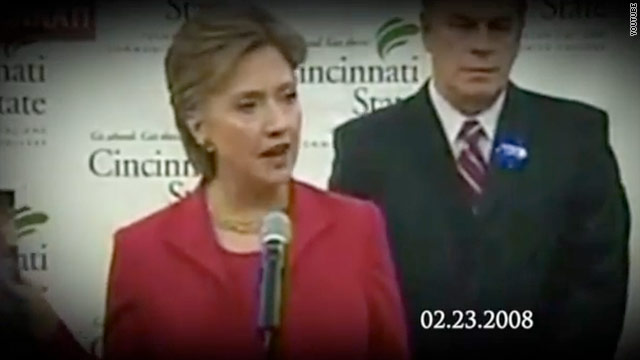 The ad uses video of 2008 presidential candidate Clinton campaigning against candidate Obama in Cincinnati ahead of the Ohio primary. Clinton accused Obama of "blatantly false" attacks against her in campaign mailers, which Romney is now using to highlight a recent fact check by the Washington Post calling one of Obama's current ads "misleading, unfair and untrue."

The Romney campaign bought over $2 million dollars in ad buys beginning Friday in seven battleground states, according to a Republican ad buying source. The Clinton ad is part of that, already airing in Ohio where the original press conference took place. Unlike all other ads it has run since Romney became the presumptive Republican nominee, the campaign did not publicly announce this one's premier.

The breakdown of the ad buy, which runs through July 3rd, is as follows:

After the government announced that the national unemployment rate in May rose to 8.2%, Obama said, "Our businesses have created almost 4.3 million new jobs over the last 27 months, but as we learned in [May's] jobs report, we're still not creating them as fast as we want."

Romney raised $4.3 million with 43,000 donations online in the first 24 hours after Thursday's Supreme Court decision upholding a majority of the president's signature health care reform bill, according the Romney campaign.