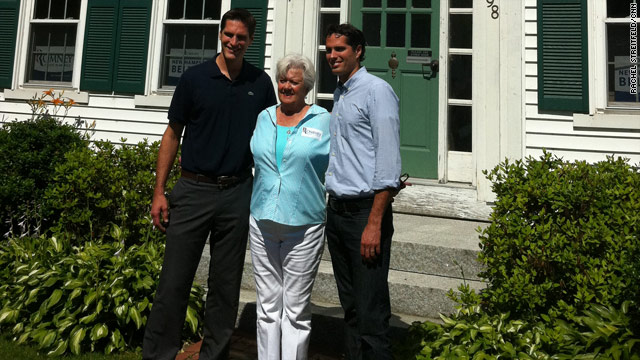 Just across town from the lakeside vacation home where the presumptive GOP nominee settled into the holiday week with family Saturday, two Romney sons stumped for their dad in this state where a poll showed him running neck-and-neck with the president.

On a sunny Saturday morning, Josh and Craig Romney welcomed about 40 locals and state politicos for the opening of the Wolfeboro, New Hampshire campaign office.

The office - a quaint green-roofed building sitting along Back Bay - is the latest in an expansion of real estate for the campaign here. With one employee and the rest volunteers, it is the campaign's third state office. Several more outposts are slated to open this week.

Meanwhile, President Barack Obama's campaign boasts 10 offices in a state he won by nine points in 2008.

At the opening, Josh Romney pushed back against the Obama campaign's criticism of his dad's record at private equity company Bain Capital.

A week earlier, Obama made his own campaign appearance in Durham, New Hampshire and tied Romney with Republicans in Congress and conservative third party groups, arguing that their collective economic proposals consist solely of tax cuts that would necessarily result in drastic reductions in government services.

"When Mr. Romney tells us he's some sort of financial wizard who can fix our economy, that's exactly how he intends to do it," Obama said.