(CNN) – The Internal Revenue Service is the "easiest, most basic way" of enforcing the health care law's fee for those who can afford to but choose not to get insurance but it is not a "tax," Democratic National Committee Chairwoman Debbie Wasserman Schultz said Monday.

Speaking on CNN's "The Situation Room with Wolf Blitzer," Wasserman Schultz said Monday, that the law should be enforced by the federal government's taxing arm because "it's simply a matter of ease in administration."
END_OF_DOCUMENT_TOKEN_TO_BE_REPLACED 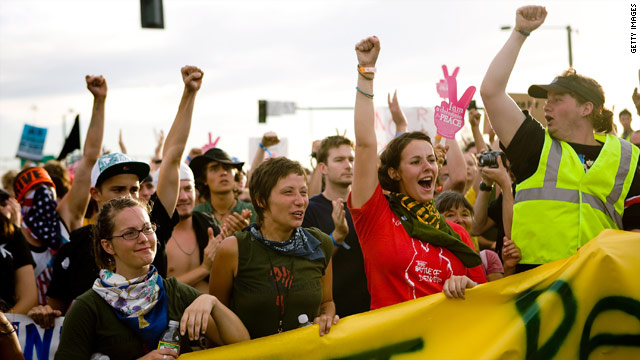 The city of Charlotte held a live lottery for those wanting to demonstrate at the convention as a way to organize the more than 40 applications for permits.
END_OF_DOCUMENT_TOKEN_TO_BE_REPLACED

Washington (CNN) - While conservatives are still seething over last week's Supreme Court ruling saving President Barack Obama's health care overhaul, top Capitol Hill Republicans are gleefully using the decision to fire up their base with promises of a repeal in 2013.

The high court's 5-4 decision "underscores the urgency of repealing this harmful law in its entirety," House Speaker John Boehner, R-Ohio, said shortly after last Thursday's ruling. "Republicans stand ready to work with a president who will listen to the American people."

BREAKING…NO BOUNCE ON HEALTH CARE… CNN POLL: HEALTH CARE RULING HAS BIG INFLUENCE ON YOUR HEALTH COVERAGE, LITTLE INFLUENCE ON 2012 RACE: Thursday's landmark Supreme Court decision appears to have had exactly zero impact on the general election so far, and has produced virtually no change in opinions on Barack Obama or Mitt Romney, although Obama has an edge among registered voters when it comes to health care. In a hypothetical two-way match-up, Obama now has a 49%-46% edge over Mitt Romney among registered voters - identical to the results from the last CNN poll conducted in late May.

END_OF_DOCUMENT_TOKEN_TO_BE_REPLACED

Romney will already be overseas in late July to attend the 2012 Olympic Games in London.
END_OF_DOCUMENT_TOKEN_TO_BE_REPLACED

Washington (CNN) - Thursday's landmark Supreme Court decision upholding the country's health care law appears to have had exactly zero impact on the presidential election so far, and has produced virtually no change in opinions on President Barack Obama or Republican challenger Mitt Romney, according to a new national poll.

And while the CNN/ORC International survey released Monday indicates the president with a very slight three point edge over Romney among registered voters nationwide, the presumptive GOP nominee appears to hold an eight point advantage among voters who live in the 15 states considered in play in the race for the White House.
END_OF_DOCUMENT_TOKEN_TO_BE_REPLACED

New York (CNNMoney) - The Supreme Court's decision on health reform brought a sigh of relief from small businesses. Whether they love or hate the new rules, they like certainty.

They could draw up business plans for next year. They could choose to hire or not.

(CNN) – President Barack Obama's plea for donations from Air Force One was "a routine fund-raising call," according to a senior campaign official.

The call, which the official confirmed took place Friday, was recorded and posted in part on the Daily Beast.
END_OF_DOCUMENT_TOKEN_TO_BE_REPLACED

(CNN) - Sen. Rob Portman of Ohio will appear at a roundtable event with New Hampshire Republicans later this week, his office publicized Monday.

According to the state's GOP, he'll lead the event Saturday at the party's headquarters in Concord, where he'll discuss the 2012 presidential election and take questions from the media.
END_OF_DOCUMENT_TOKEN_TO_BE_REPLACED