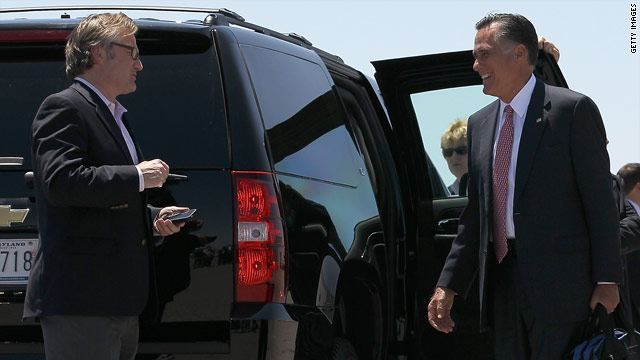 Eric Fehrnstrom, in an interview on MSNBC, said Romney agrees with President Obama that the individual mandate is no tax.

"He agreed with the dissent written by Justice Scalia which very clearly stated that the mandate was not a tax," Fehrnstrom said.

When pressed repeatedly if Romney agrees with Obama and Democrats that the penalty is no tax, Fehrnstrom eventually said, "That's correct."

Fehrnstrom came to national attention earlier this year during the Republican primaries when he referred to the eventual switch to a general election campaign as being like an Etch-A-Sketch where you can shake it and start over. The remark created a firestorm as Romney's Republican primary opponents pointed to it saying that he would not stand firm in his conservative policy positions if he won the nomination.

Many Republicans, however, disagree with Fehrnstrom on "tax" versus "penalty."

"This is a middle-class tax increase," Sen. Marco Rubio of Florida told CNN's Candy Crowley hours after the decision. "And you know why we know it's a middle class tax increase? Not because I'm saying it, because the Supreme Court has said. It's the basis for them upholding it. I think Americans now understand what this law really is all about."

House Budget Committee chairman Paul Ryan also called it a tax, and criticized the logic behind the court's majority opinion.

"I agree with the dissenting judges. I think they basically had to rewrite the statute in order to call this a tax," Ryan said Sunday on ABC News' "This Week."

Previously, Romney has defended the law he signed when governor of Massachusetts, called by some Romneycare, which included a similar individual mandate on a state level. While Republicans have been vocal about pointing to the penalty being termed a tax, his campaign has been careful to avoid being drawn into a comparison on the point.

And in reaction to Fehrnstrom's comments Monday the campaign focused on whether the national health care law is constitutional.

Rick Santorum, one of Romney's former rivals for the GOP presidential nomination, said Thursday on CNN's "Piers Morgan Tonight" that both Romney's and Obama's laws include an individual mandate tax.

"They have a series of problems with people who decide to take the tax, in other words, pay the fine, instead of buying insurance, because it's actually cheaper, particularly younger and healthier people who - who are dropping out of the health care system," he said of the Massachusetts case.

Santorum and other Republicans have been critical of the Massachusetts law, which Romney has defended as a state solution which was valid under the state's constitution, but not an appropriate national fix to expanding insurance coverage.

The matter of whether or not the national individual mandate is a tax has implications beyond what language is used in an election year.

Republicans, including Rep. Phil Gingrey of Georgia, argue that the ruling makes their effort to repeal the law easier because tax laws are not subject to filibuster in the Senate, which requires 60 votes to overcome.

The Senate can "do it by reconciliation since it's a tax issue now, as Justice Roberts has redefined the law," Price said on CNN's "Starting Point" Friday morning.

On Sunday morning, Obama's White House chief of staff explained the subtle distinction Democrats used to argue the law was not a tax.

"Well, actually, they didn't call it a tax," Jack Lew said on CNN's "State of the Union." "They said it was using a power under the Constitution that permits it. It was not labeled.

"And this is a penalty. It's something that only one percent of the people who could afford insurance who choose not to get it will pay," Lew continued.

Stephanie Cutter, Obama's deputy campaign manager, said Friday on CNN's Starting Point argued it was not a tax, but a penalty, saying "if you choose not to get health care and you're imposing a hidden tax on all of us because we pay for your health care, then you pay a penalty."

While campaigning in 2008, Obama said the health law would not result in a tax increase.

The Supreme Court found that, "the federal government does not have the power to order people to buy health insurance."

"The federal government does have the power to impose a tax on those without health insurance," Chief Justice John Roberts wrote in the majority opinion.