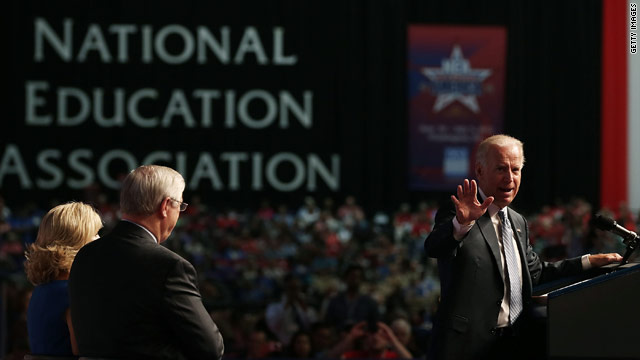 "You guys – educators, teachers, you are under full blown assault. Romney, Romney, Governor Romney and his allies in the Congress - their plan for public education in America is to let the states use Title I dollars to boost enrollment in private schools," Biden said.

The NEA, a strong supporter of President Obama, was a highly-receptive audience for the Vice President.

Biden also said, "I can't think of a candidate for president who has ever made such a direct assault on such an honorable profession."

"We believe that the way to build this country is the way we always have," Biden said. "From the middle out, that's how it's always been done: invest in the things that have always made our economy grow: innovation, research, development, infrastructure, and education."

While emphasizing the importance of teachers to the fabric of society, Biden also continued with the theme that Romney's candidacy is one that would put their beliefs in jeopardy. Continuing on Romney, Biden said "this ain't your father's Republican party. These guys have a different view of how to move America forward."

Amanda Henneberg, a spokesperson for Romney's campaign responded, "Vice President Biden today doubled down on the same policies that have failed to fix our economy and help the middle class. Instead of putting students first, Vice President Biden and this administration have stood with union bosses. Instead of creating good jobs for graduates, this administration has presided over one of the bleakest jobs markets for young people. Mitt Romney has the plan and record to put students first and make sure that they have a job waiting for them when they graduate."