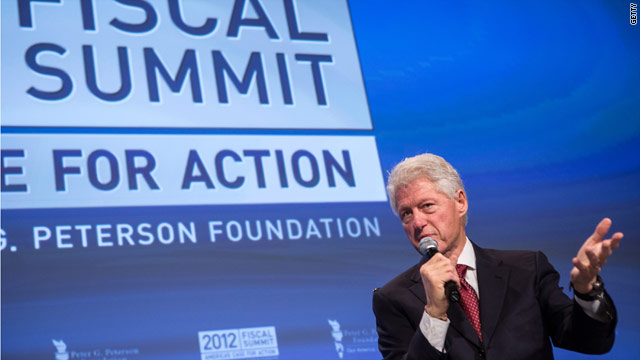 BREAKING… ECONOMIC OPTIMISM JUMPS, NEITHER CANDIDATE HAS EDGE: Although most Americans think the economy is in poor shape, economic optimism has climbed steeply since last fall. In 2011, polls for the first time found that more than half the country thought economic conditions would worsen in the next 12 months. Now that trend has reversed itself, with only four in 10 saying the economy will be in poor shape a year from now. … The public is split right down the middle, with 48% saying Romney would do a better job on the economy and 47% choosing Obama.

DEVELOPING… NO THANK YOU’S ARE BIPARTISAN: George Allen, who's running in a heated Senate race in Virginia, will not be attending the Republican National Convention in August, his campaign confirmed Tuesday. A number of Democrats facing re-election have announced they won’t be attending their convention this year, but Allen joins the relatively few Republicans – Heather Wilson, a Senate candidate in New Mexico and Rep. Denny Rehberg, a Senate candidate in Montana – who have made similar decisions for their own party's big gathering.

TRAIL TRIVIA
(Answer below)
How many presidential elections had to be decided by the House of Representatives and who won those elections?

Years of public service can often translate to lucrative secondary careers for lawmakers, bureaucrats, political aides, and yes, presidents. Former President Bill Clinton is a prime example of somebody who has been earning millions each year for delivering speeches around the world, which is chronicled in a new report by CNN Director of Political Research Robert Yoon.

As Yoon points out, Clinton is closing in on the $100 million mark in earnings for paid speeches since leaving the White House in 2001. Here are some key nuggets of Yoon’s reporting from data contained in Secretary of State Hillary Clinton's annual financial disclosure report:

– In 2011, former President Clinton commanded the largest speaking fees of his career, a whopping $13.4 million.

To read more, check out Yoon’s story on CNNPolitics.com.

And we offer this bit of Gut Check advice: Follow @yoonCNN, a new addition to Twitter and one of the sharpest political minds in Washington.

Leading CNNPolitics: Mormon influence in Nevada fading, but still a factor
Although Mitt Romney is certain to energize Mormon voters this election season as the first member of his church to helm a major party's presidential ticket, political watchers here say the LDS vote in Nevada rarely lives up to its billing in the national media. – Peter Hamby

Leading Drudge: Team Obama ♥ Bain-Backed Staples
While their candidate is out bashing Mitt Romney's Bain Capital as a job outsourcer and greedy corporate raider, President Obama's campaign is endorsing the essence of one of Bain's biggest success stories, low-price office supply store Staples. Team Obama turns out to be a big fan, spending $17,963.04 at Staples this year alone, according to Federal Election Commission reports. – Paul Bedard

Leading HuffPo: John Roberts' Switch On Obamacare Sparks Fascination With Supreme Court, Possible Leaks
Since the U.S. Supreme Court handed down a ruling to uphold the heart of President Barack Obama’s health care law, the media’s fascination with Chief Justice John Roberts' decision to side with the majority and uphold the mandate as a tax has reached a fever pitch. – Sabrina Siddiqui

Leading Politico: The Medicaid ruling's ripple effect
Think last Thursday’s Supreme Court ruling was just about health care? Think again. Chief Justice John Roberts’s surprise opinion, which allows states to opt out of the law’s Medicaid expansion, could set up a series of legal showdowns between states and the federal government over the strings attached to billions of dollars in federal grants for everything from transportation to education and the environment. – J. Lester Feder and Darren Samuelsohn

Leading New York Times: Romney, an Eye on Campaign, Plans a Trip to Israel
Mitt Romney, the presumptive Republican presidential nominee, will visit Israel this summer to meet with Prime Minister Benjamin Netanyahu and other leaders, a senior aide to the prime minister confirmed on Monday evening. – Jodi Rudoren

- Answering the call is a start -
NEW JERSEY GOV. CHRIS CHRISTIE IN AN INTERVEIW WITH CNBC: “I love being governor of New Jersey, you can tell. I think every day the way I do my job I love it. But the fact is, if Gov. Romney picks up the phone and calls, you have to answer the call and listen at least.”

- Running as a Dem in a Republican state means tempered view on Obamacare -
FORMER NEBRASKA GOVERNOR AND SENATE CANDIDATE BOB KERREY AT A CAMPAIGN EVENT IN NORTH PLATTE, NEBRASKA: "I'm a Democrat and generally supportive of the Health Care Act but I am willing to make significant modifications in a way I think Republicans would appreciate."

- Brown, though, channels Bon Jovi in Blue Massachusetts -
SEN. SCOTT BROWN IN A RADIO AD: “The ruling by the Supreme Court to uphold the Federal Health Care Law is bad medicine for the economy, the budget and jobs. … This massive new entitlement means trillions in new spending and higher taxes, not to mention half a trillion dollars in Medicare cuts for our seniors. I talked to many employers, especially small business owners, and they tell me they're afraid to hire more people because of the law.”

- Joe Biden: The populist attack dog -
VICE PRESIDENT JOE BIDEN AT A NATIONAL EDUCATION ASSOCIATION CONVENTION CONTINUES HIS ATTACK ON MITT ROMNEY: “Your cause in life is preventing children from having a real chance. Is he serious? He is, though. He is. I believe he believes what he says. That’s why I believe they mean what they say about their budget. I have been doing this for awhile. I can’t think of a candidate for president who has ever made such a direct assault on such an honorable profession.”

TRIVIA ANSWER
Only two presidential elections have been decided by the House of Representatives.

First, in 1800, Thomas Jefferson and Aaron Burr contested the presidency from the same party and received the same number of Electoral College votes – 73 to 73. The United States was made up of 16 states at that point, so when the presidential election went to the House, at least nine state delegations needed to agree on Jefferson or Burr.

Over six days, the House voted 35 times and Jefferson only received eight state delegations, one less than the nine needed. It was Alexander Hamilton, Jefferson’s political nemesis, who broke the stalemate with a letter campaign to the anti-Jefferson delegations. On vote number 36, Jefferson earned 10 state delegations and won the presidency.

According to the House clerk, the Jefferson-Burr election spurred passage of the 12th Amendment.

Twenty-four years later in 1824, the 12th Amendment was used when none of the three presidential candidates, Sen. Andrew Jackson, Secretary of State John Quincy Adams and Secretary of the Treasury William Crawford, received a majority of Electoral College votes.

Even though Jackson won a majority of the popular vote, the election was thrown to the House to decide. Henry Clay, speaker of the House at the time, had run for president in 1824 but finished fourth and was not included in the House runoff. He did, however, end up playing a large role in selecting the president when he made his loathing of Jackson well known and threw his support behind Adams.

With Clay by his side (and later rewarded as his future secretary of State), John Quincy Adams became the sixth president of the United States with a majority of the House of Representatives voting for him.

#AskWolf
Have a question for Wolf Blitzer? Want his take on politics or what it was like to have Herman Cain label him “the Blitz” in a national debate? Tweet @WolfBlitzer with #AskWolf or send a question via CNN.com/Ireport. Tune into the new 6pm hour of The Situation Room to see if your question is asked.