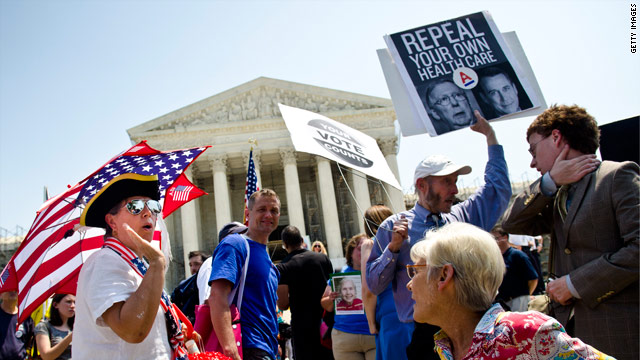 (CNN) - Independent voters largely disapprove of or are indifferent to the plans for the US health care system of President Barack Obama and presumptive Republican nominee Mitt Romney, according to a new poll.

Only one in four independent voters approve of Romney's plans and only two in five approve of Obama's plans, according to the ABC News/Washington Post poll released on Tuesday. It is the third major national poll conducted and released since the landmark Supreme Court ruling on Obama's law last Thursday.

The poll shows Americans' opinions on the law and presidential race overall are evenly divided.

Forty three percent of registered voters agreed with the high court's ruling to uphold the law and 42% disagreed, the poll showed.

Independent voters were more divided. Thirty-six percent held a favorable view of the court's ruling and 43% held an unfavorable view.

But the ruling may not yet be influencing voters' decisions in the presidential race, with a CNN/ORC International Poll released Monday showing Obama and presumptive Republican nominee Mitt Romney statistically tied.

Those results are unchanged from a May CNN poll.

A USA Today/Gallup survey conducted hours after the ruling showed 46% agreed and 46% disagreed with the court's 5-4 decision, a split which occurred largely along party lines.

Voters overall are more favorable to Obama's plans for the health care system than Romney's, according to the Washington Post/ABC News Survey. Forty-five percent of registered Americans have a favorable view of Obama's plans, while only 31 percent view Romney's plans favorably. Approximately half of registered voters have a net unfavorable view of each candidate's plans, the poll shows.

Republicans favor Romney's vision for the health system - 62% in support of and 20% opposed – Democrats lean towards Obama's plans, 80% to 17%.

The telephone poll of 1,019 adults was conducted between June 28 and July 1. It has an overall sampling error of plus or minus four percentage points.