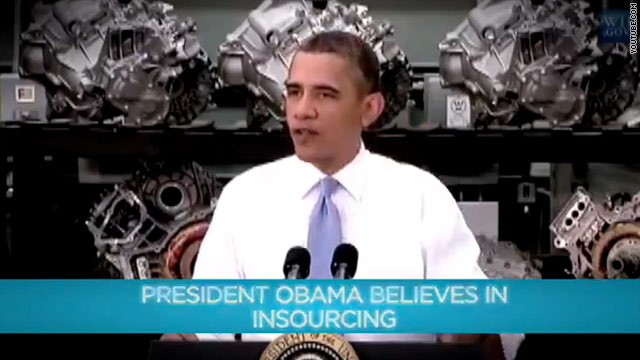 (CNN) - President Barack Obama's re-election campaign says they're going up Tuesday with a new TV commercial that attacks Mitt Romney for what they say is the Republican challenger's past support of outsourcing jobs overseas.

The Obama campaign says the 30-second spot is running on TV in Colorado, Florida, Iowa, North Carolina, New Hampshire, Nevada, Ohio, Pennsylvania, and Virginia, all important swing states that both campaigns will contest in the race for the White House. The ad will run on broadcast and on national cable, including on CNN.

The new commercial follows three ads put out last week by the Obama campaign that also attacked the presumptive GOP presidential nominee for outsourcing. The spots came under scrutiny from Romney's campaign, as well as a third party fact checking group. Those ads went up in Iowa, Ohio, and Virginia. The premise in all the commercials pull from a Washington Post story published a week and a half ago that claims Bain Capital, the private equity firm co-founded by Romney, owned companies that were "pioneers" in outsourcing, particularly in low-wage countries such as China and India.

Both the president and Vice President Joe Biden have also personally slammed Romney over the report.

The first round of outsourcing spots by the Obama campaign came under scrutiny by FactCheck.org, a nonpartisan group affiliated with the Annenberg Public Policy Center, which said that some claims in the spots were untrue, and other assertions only had thin supporting evidence.

"The Obama campaign continues to try to mislead voters with ads that independent fact checkers have repeatedly proven to be false," Romney campaign spokeswoman Amanda Henneberg wrote. "We are happy to put Governor Romney's record of job creation in the private sector, and as governor, up against President Obama's any day. Spending millions of dollars on untrue ads won't change the fact that President Obama's policies have left more than 23 million Americans struggling for work."

Last week, Romney's campaign pushed back hard on the Washington Post article, saying it failed to draw a distinction between "domestic outsourcing" and "offshoring."

Outsourcing, the campaign argued, is a common practice and can occur domestically without sending jobs overseas. Offshoring, on the other hand, involves shifting work out of house and overseas.