(CNN) – The summer will provide no reprieve from campaign ads. About $25 million from the Obama campaign will air throughout the battleground states in July, according to a Republican ad buying source.

The Romney campaign has not bought air time for the entire month yet but is already spending over $7.5 million through July 10.

The numbers are in addition to the $6.5 million the Obama team bought during the Olympics to air at the end of the month and beginning of August.

The first of the 30-second Obama ads in this buy accuses Romney of outsourcing jobs while at Bain Capital, a charge Romney's campaign dismisses. These ads account for over $20 million of the president's July buy. Another $3.8 million will be spent on 60-second ads yet to be released by his reelection team.

Romney brought back an old rival of Obama's in his ads this past week – Hillary Clinton. Using her words while campaigning against the then-senator in 2008, he accuses the president's team of airing misleading ads. In its largest weekly buy since becoming the presumptive nominee, his team bought about $5 million in ads beginning Wednesday to run through July 10. The Romney campaign refuses to release the ads that will be airing during this time.

It's unprecedented to spend this much money before the official convention that starts the fall campaign. The president's reelection team spent over $32 million in June as well. While Romney hasn't matched Obama in numbers, he spent more time campaigning in many of the swing states during his primary fight earlier this year. The presumptive Republican nominee spent about $14 million on ads in June.

Both campaigns are airing ads in Colorado, Florida, Iowa, North Carolina, New Hampshire, Nevada, Ohio, and Virginia. Team Obama is up in Pennsylvania as well. Here's the current breakdown. 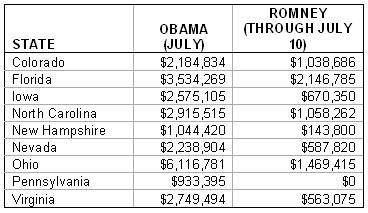