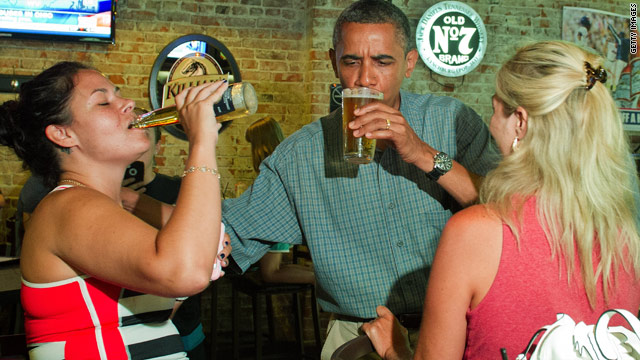 On Ohio bus tour, Obama stops to refuel – himself

(CNN) - He had one more Ohio campaign stop on his schedule, but President Barack Obama's bus first pulled over Thursday evening for a beer.

The president's visit to Ziggy's Pub and Restaurant was his fifth campaign event of the day in the battleground state of Ohio. On Friday, his bus tour will continue in neighboring battleground Pennsylvania.

At Ziggy's in Amherst, Ohio, one man told Obama he would "arm-wrestle you for your vote," according to a pool of reporters allowed inside.

"No," replied Obama, "I'll play basketball for your vote."

Earlier in the day, Obama stopped at a farm stand in Port Clinton, Ohio, where he paid cash for corn, strawberries and cherries.

And before that, Obama stopped in at a small restaurant in Oak Harbor.

As he went table-to-table in the dining room, Obama offered marriage advice to one couple, complimented a young boy on his spiked blue hair ("I was thinking of getting some hair just like it"), and held a baby.

At another table, Obama asked several white-haired ladies if the card game they had played regularly for decades was played for money.

"Tell the truth – the national press is here," he said.

Then he settled down with former Gov. Ted Strickland, D-Ohio, for a burger and iced tea.

Strickland was with Obama later in the day when bus pulled over at the pub. On tap for the president and governor: Miller Lite; reporters in the restaurant said Obama was later holding a bottle of Bud Light.

Properly refueled, Obama boarded the bus, which set course for his third speech of the day.