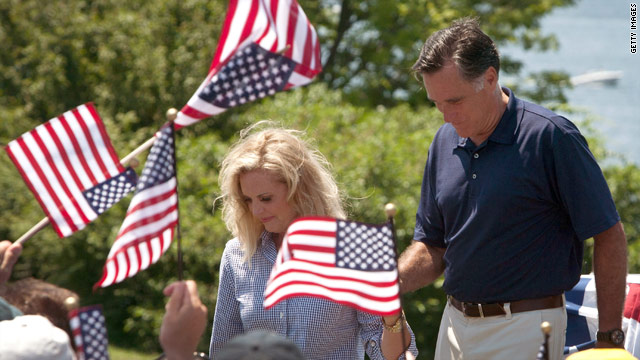 (CNN) – As political chatter over Mitt Romney's choice for running mate gets louder, the presumptive GOP nominee's wife offered a new glimpse into the highly secretive process: the campaign, she said, is looking at women.

"We've been looking at that," Ann Romney said when asked in a CBS interview whether her husband should select a woman to join him on the GOP ticket. "I'd love that option as well. So, you know, there's a lot of people that Mitt is considering right now.

Ayotte, the Granite State's junior senator, is one of several of female politicians that could be on Romney's vice presidential list. New Mexico Gov. Susana Martinez, South Carolina Gov. Nikki Haley, Oklahoma Gov. Mary Fallin, and former Secretary of State Condoleezza Rice have all been mentioned in the media as potential running mates for Romney.

Minnesota Rep. Michele Bachmann, who has not been frequently discussed as a potential contender, left it up to the presumptive GOP nominee and his team to make a comment when asked about the process in an interview on CNN Monday.

"Well, that's something for the campaign to answer on," she said on "Piers Morgan Tonight." "That's not for me to make that decision, and that announcement."

Ann Romney said in the interview Wednesday she had a few names on the top of her list of potential running mates.

"I like to think that I have a few that I really like a lot," she said.

Speaking about Democrats aiming to re-elect President Barack Obama, Ann Romney lamented what she saw as a brutal tactic to take her husband down.

"I think early on we heard what their strategy was. It was kill Romney," Romney said.

The candidate's wife continued: "And I feel like that's not really a very good campaign policy. I feel like Mitt's got the answers to turn this country around. He's the one that's gotta bring back hope for this country, which is what they ran on last time."