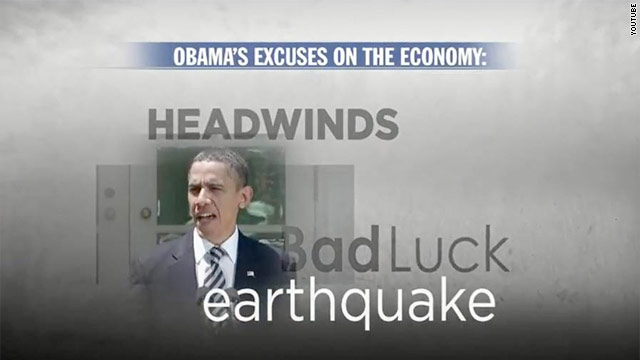 Washington (CNN) - An independent group co-founded by Karl Rove says it's going up with a new TV commercial that highlights what it claims are President Barack Obama's excuses for the bad economy.

Crossroads GPS said Friday that the spot is the first wave of a $25 million ad buy starting July 10 and running through early August. The group says the ad will air on network TV in Colorado, Florida, Iowa, Michigan, North Carolina, New Hampshire, Nevada, Ohio and Virginia, all important swing states that both Democrats and Republicans will heavily contest in presidential election.

Crossroads GPS put out an email release touting the ad about an hour after the release by the Labor Department of a disappointing June jobs report.

"America's jobless rate is still too high. Barack Obama's got lot of excuses for the bad economy," says the narrator in the spot.

The ad then includes clips that include the president saying "headwinds coming from Europe," and "we've had a string of bad luck."

Crossroads GPS is the sister organization to American Crossroads, the independent super PAC that backs GOP causes and candidates. Crossroads GPS has spent tens of millions of dollars to run advocacy ads in the race for the White House that are critical of the president and in support of GOP lawmakers and candidates in crucial Senate contests.

The new spot also includes a clip of Obama saying "we've been a little bit lazy, I think, over the last couple of decades." The ad uses the clip as what they say is another excuse the president is making for the state of economy.

The president made the comment last November in response to a question about how foreign investors viewed the United States. When listening to the rest of his remarks, Obama seemed to be describing U.S. business practices as "lazy," rather than American workers or voters. The comments appeared to be taken out of context when they were used in a TV ad for Texas Gov. Rick Perry's failed campaigns for the GOP nomination.