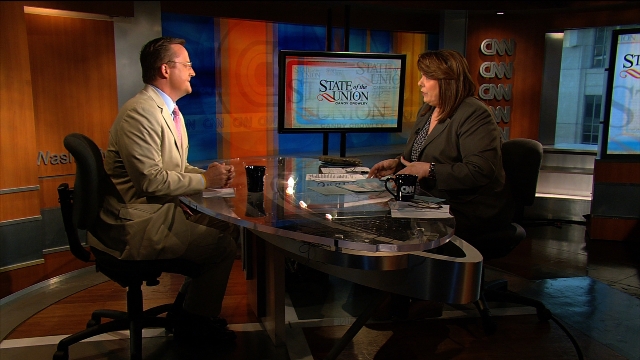 Gibbs, however, stopped short of saying whether Romney was in violation of any tax evasion laws, saying "nobody knows."

"The best way to figure out if he is complying with American tax law is to have him release more of the tax returns," the former White House press secretary said on CNN's "State of the Union."

Gibbs linked Romney's reported offshore investments in Bermuda, the Cayman Islands and Switzerland to his history as a private equity CEO, painting the candidate as out of touch and too eager to place money overseas rather than in America.

"I pick a bank because there's an ATM near my home," Gibbs told CNN Chief Political Correspondent Candy Crowley. "Romney had a bank account in Switzerland."

However, Gibbs said it wasn't enough.

"This is a guy whose slogan is 'Believe in America,' and it should be 'business in Bermuda.' And that is what he is all about."

Obama's campaign has also been forcefully pushing a Washington Post report that calls Romney's former private equity firm, Bain Capital, a "pioneer" in outsourcing jobs overseas. The campaign has made the report a focal point of its ads against Romney, and the president frequently mentions it in his stump speeches.

Romney's campaign, however, has said there is no evidence that Bain advised its companies to outsource while Romney was still in charge of the firm, which he left in 1999.

The campaign cites a detailed report by FactCheck.org, a nonpartisan group affiliated with the Annenberg Public Policy Center, that said the Obama ads carried some claims that were untrue, and other assertions that only had thin supporting evidence.

FactCheck's report acknowledged that Bain was involved in "some companies that helped other companies outsource work and that some of that work went overseas," but questioned whether those companies could be linked to Romney.

The FactCheck report concluded: "We found no evidence to support the claim that Romney - while he was still running Bain Capital - shipped American jobs overseas."

Obama's campaign, however, has repeatedly hit back by again bringing up the Washington Post story.

Pressed Sunday on why the campaign continues to use the Bain offense, despite some Democratic pushback and disputes by fact-checking groups, Gibbs said it was "important."