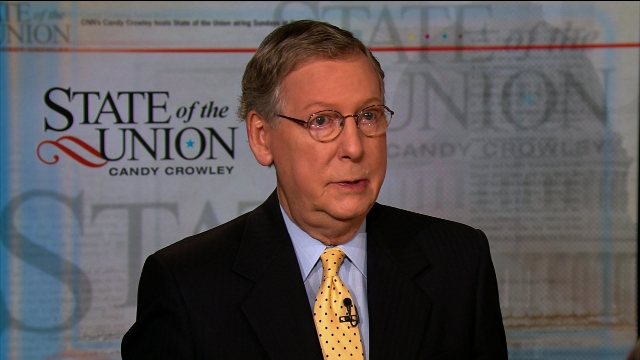 (CNN) - Senate Minority Leader Mitch McConnell hedged his bets Sunday when asked about the GOP's chances of winning control of the Senate in November.

"50-50. I think it's going to be a very close, competitive election," the Kentucky senator said on CNN's "State of the Union."

Party leaders are especially watching two races under way in Virginia and Massachusetts that are both rated as tossups.

Republican Sen. Scott Brown of Massachusetts is fighting to keep the seat he won in a special election in 2010 to replace the late Ted Kennedy. However, Democratic challenger Elizabeth Warren has strong backing from her party’s heavyweights and significant fund-raising power. Polls have shown the two candidates to be statistically tied for months.

Meanwhile in Virginia, two former governors have been running neck and neck for close to a year to replace retiring Democratic Sen. Jim Webb. Former Sen. George Allen and former Democratic National Committee Chairman Tim Kaine will continue to battle it out through November in a race widely expected to be influenced by the presidential election.

Despite describing the two contests as competitive, McConnell said he still anticipates Republican victories in both states.

The GOP has its eye on a number of other races, including those in Missouri and Montana - where Democrats face tough re-election bids - and in Nebraska and North Dakota, where Republicans are backing conservatives in two open Senate races.

Their endeavor to take back the Senate grew more complicated earlier this year when Sen. Olympia Snowe of Maine announced her retirement. While Snowe, a moderate, was popular in her state, political observers say it's very possible a Democrat could pick up her seat in the typically blue state.

McConnell, however, held back on predicting a solid win in the Senate for either party this November.

"I think at the end of the day we're going to have a very narrow Senate, one way or the other,” the minority leader said.