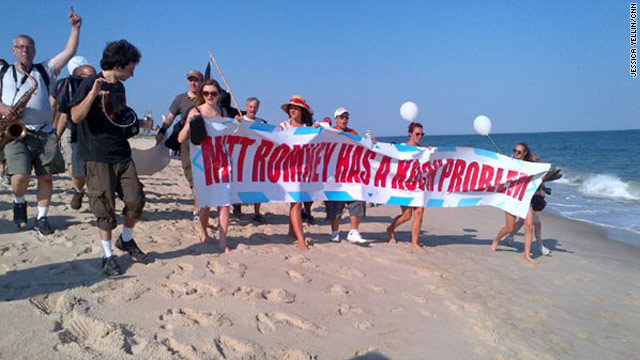 Protesters demonstrate outside of Koch fund-raiser for Romney

Southampton, New York (CNN) – Some 200 protesters, according to local law enforcement officials, gathered Sunday near the residence of billionaire David Koch, who held a private fund-raiser attended by Mitt Romney at his home in Southampton.

The protesters, taking issue with the amount of money Koch and his brother Charles are likely to spend in the race, carried signs and beat drums as they marched along the water near Koch’s residence and chanted, "Our elections aren't for sale," and "Whose beach? Our beach."

As they walked to the Koch residence, they passed the homes of fashion designer Calvin Klein and financier Leon Black. One group carried a large sign that read, "Romney has a Koch problem," while a plane flying overhead carried a banner with the same message.

David Koch, and his brother Charles are controversial figures in the Republican Party who support conservative and libertarian causes. Backers of the group Americans for Prosperity, the pair of industrialists are expected to spend tens – if not hundreds – of millions on Republican causes this year.

"We're here because of David Koch and his vow to purchase a president,” said Anthony Zenkus, with Occupy Wall Street, pointing to the large amount of money the Koch brothers are speculated to spend. “It doesn't sound like democracy to me."

Romney was in the area for three fund-raising events. Along a stop at the Koch home, Romney also appeared at a lunch hosted by business magnate Ron Perelman in East Hampton, as well as an event at former U.S. Ambassador Clifford Sobel’s home on Meadow Lane in Southampton.

Mark Epley, mayor of Southampton, characterized the demonstrations as "going well so far."

In East Hampton, where Perelman lives, two men were arrested after running their sailboat into a marine patrol unit set up as part of a police line along the shore, according to East Hampton Village Police Captain Michael J. Tracey.

The two men’s boat attempted to cross the line, but struck the police boat. One of them tried to flee by swimming to shore but was met by more police and arrested on the beach. Both men were charged with obstructing governmental administration, resisting arrest and disorderly conduct, according to Tracey.

The Koch residence in Southampton was surrounded by a high level of security, including about two-dozen personnel stationed outside the residence along the beach.

The protesters were assembled in a "free speech area" several blocks down from the Koch property, according to New York state police captain David Candelaria. Law enforcement officials shut down a portion of the road for the demonstrators, some of whom bused in from New York City.

"Its peaceful,” he told CNN as the protest was still underway. “No issues."

Responding to the protests, Romney's campaign described them as an example of the left attempting to divert from the president's record.

"After three and a half disappointing years in office, President Obama and his liberal allies are desperate to divert attention from his broken promises and failed record," said spokesman Rick Gorka in a statement."Under this President, unemployment has risen to 8.2% and his administration has been unable to propose any new ideas that can turn around our economy. As President, Mitt Romney will reform our tax code, cut bloated government spending and promote pro-growth policies that will create jobs for middle class families.”

- CNN’s Jessica Yellin and Khara Lewin contributed to this report.