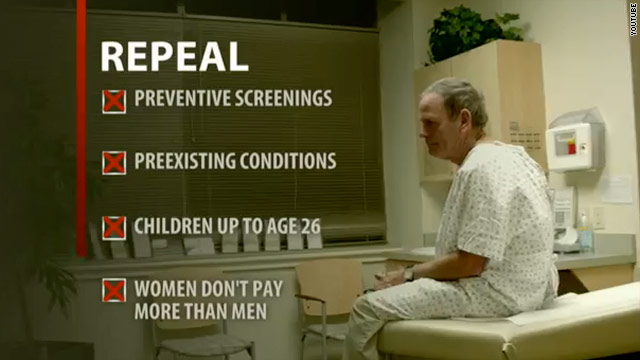 (CNN) - The Democratic campaign arm for the U.S. House of Representatives released a series of new online ads Monday, attacking certain House Republicans over their opposition to the federal health care law.

The web videos come the same week the House is set to vote to repeal the law, which was passed in 2010 with Democratic support and ruled upheld by the Supreme Court last month.

Pushed by the Democratic Congressional Campaign Committee, the ads target seven House Republicans the group considers "vulnerable" in November. Democrats are aggressively trying to pick up 25 House seats this fall in order to take the House majority.

"House Republicans are sending an unmistakable message to voters that Republicans want to cut benefits for middle class families and protect insurance companies instead," DCCC Chairman Steve Israel said in a statement. "The American people don't want more of these political stunts from Republicans to pander to special interests, they want action to strengthen the middle class and create jobs."

The ads urge viewers to contact their representatives and tell them not to vote to repeal the law. In the ad targeting Rep. Mary Bono Mack of California, for example, the narrator introduces a character named "Carla," who received a breast cancer screening that ultimately "saved her life."

"Carla doesn't know that her Congresswoman Bono Mack may vote to repeal the law that added preventative coverage to Medicare," the narrator says. "Your member of Congress may vote to repeal important health care benefits for everyday Americans. But she protected 'generous' health plans for Congress at taxpayer expense."

The ad concludes with a call to action: "Tell Congresswoman Mary Bono Mack: She shouldn't repeal our benefits if she wants to keep hers."

House Republicans, however, have long insisted they would press for a vote to repeal the law if the Supreme Court ruled in its favor.

Responding to the Supreme Court's decision, House Speaker John Boehner vowed to continue to work towards a full repeal. The House is scheduled to vote on the bill on Wednesday, a move it has taken multiple times since 2010 but Republicans have made no headway in their effort under the Democratic-controlled Senate.

"This has to be ripped out by its roots. This is government taking over the entire health insurance industry," Boehner said last week on CBS. "The American people do not want to go down this path. They do not want the government telling them what kind of insurance policy they have to buy, and how much they have to pay for it, and if you don't like it we're going to tax you. It has to be ripped out and we need to start over."

The DCCC's counterpart, the National Republican Congressional Committee, responded to the new ad roll-out on Monday.

“It’s refreshing that Democrats are doing our work for us this week by reiterating their support for ObamaCare and the massive middle-class tax increase that comes with it. Maybe next time they will actually spend money on ads that highlight the bill’s $500 billion in cuts to Medicare or its burdensome regulations that are preventing small business’ from hiring,” said Paul Lindsay, the group's communications director, in a statement.

In addition to Rep. Mack, the ads will target the following Republican lawmakers: