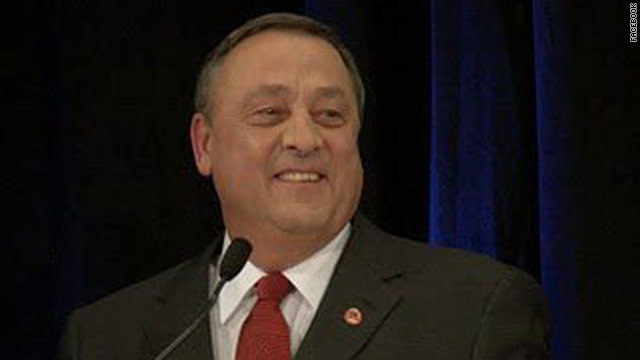 "It was not my intent to insult anyone, especially the Jewish Community, or minimize the fact that millions of people were murdered," the Republican governor said in a statement.

He argued that Congress could now use its taxation power to "compel behavior or lack thereof," and asked what the government would do next: "More taxes if we don't drive Toyota Priuses or if we eat too much junk food or maybe even pea soup?"

He continued: "This decision has made America less free. We the people have been told there is no choice. You must buy health insurance or pay the new Gestapo – the I.R.S."

LePage's office posted his prepared remarks on his website, which includes the sentence about the Gestapo. It also links to audio of the speech, but the link fails to connect to the actual clip.

In his apology Monday, he expressed concern that the controversy had overshadowed the original intent of his address.

"Clearly, what has happened is that the use of the word Gestapo has clouded my message," he said, saying the health care law "rations" care and could "negatively impact millions of Americans."

"We no longer are a free people. With every step that Obamacare moves forward, our individual freedoms are being stripped away by the Federal Government. This should anger all Americans," he said.

Democratic state lawmakers, seizing on the comments this weekend, had charged the governor with trivializing those who suffered under the Gestapo, the secret police force that operated under Nazi-controlled Germany.

"This goes beyond political rhetoric," Cain said in a statement.

Her office added that LePage, who's known for making off-the-cuff statements in the past, read his speech from prepared remarks, and did not ad-lib the remark during his address.

"He was trying to pick a fight, he knew exactly what he was doing," Alfond told CNN, saying he was worried about how the comments may affect the state's reputation to outsiders.

"The governor should do something right for the wrong that he created."

LePage was elected in 2010 with tea party support. His office did not immediately respond to requests for comment.