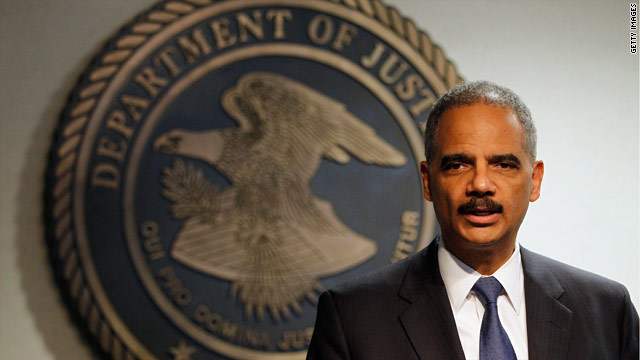 (CNN) - Conservative websites were abuzz Tuesday after one suggested it was ironic that the NAACP requested reporters covering a speech by Attorney General Eric Holder bring two forms of identification, a common practice at major events.

Holder has spoken out - most recently in his speech at the convention on Tuesday - against state laws that would require individuals to present photo identification to vote.

"In our efforts to protect voting rights and to prevent voting fraud, we will be vigilant and strong," Holder said at the NAACP convention in Houston. "But let me be clear: We will not allow political pretexts to disenfranchise American citizens of their most precious right."

He said voter ID laws, such as one proposed in Texas that his Justice Department is fighting, are "harmful to minority voters," who may be unable to travel to or afford to obtain suitable identification.

The conservative website Townhall.com pointed to an NAACP press release, which it said requested reporters bring a government-issued photo identification as well as a credential from their organization when checking in, which is not unusual at that type of event.

"What did media need in order to attend? That's right, government issued photo identification (and a second form of identification, too!), something both Holder and the NAACP stand firmly against when it comes to voting," a post to the website read.

Other conservative websites posted on the matter, including one site that wrote, "NAACP Requires Photo ID To See Eric Holder Speak About His Efforts To Stop Voter ID Laws."

In addition to the voting issue, Holder has been in the spotlight in connection with the Fast and Furious gun-running sting. The House of Representatives voted last month to hold Holder in contempt of Congress over his refusal to release some documents relating to the program, the first time a sitting attorney general has been held in contempt by Congress.