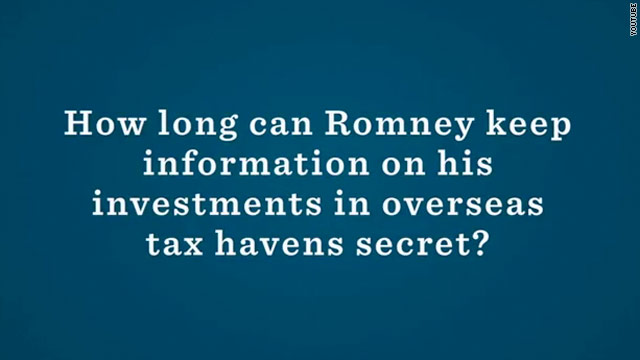 (CNN) - President Barack Obama's re-election team is keeping up their attacks on Republican challenger Mitt Romney over what they describe as his lack of transparency.

A new web video released by the Obama campaign Tuesday claims that the presumptive GOP presidential nominee is "defying calls to release more than one year's worth of tax returns."

The video starts with a clip from CNN's "The Situation Room with Wolf Blitzer" from Monday in which Blitzer asked former Republican National Chairman Haley Barbour if he were in Romney's shoes, would he release more than two years of tax documents, something Democrats have repeatedly called on Romney to do.

"I would," responded Barbour, the former two-term governor of Mississippi, who weighed but decided against a run for the 2012 GOP nomination.

Barbour continued to say "but should it be an issue in the campaign? I don't think it amounts to diddly," but that was not included in the Obama campaign video.

Democrats have criticized Romney for not releasing more than his 2010 returns and an estimate of his liability for tax year 2011, which he made public in late January. Romney, one of the wealthiest candidates to ever seek the presidency, has drawn particular scrutiny, interest and criticism over his finances. And the pressure is yet greater because his father released a dozen years' returns when seeking the presidency in the 1960s.

Obama on Monday weighed in on the issue, calling for greater transparency from his Republican challenger.

"What's important is, if you are running for president, is that the American people know who you are and what you've done and that you're an open book," Obama said in an interview with CNN affiliate WMUR in New Hampshire. "And that's been true of every presidential candidate dating all the way back to Mitt Romney's father."

Obama's campaign recently seized on a report in the magazine "Vanity Fair," which called Romney a "remarkable financial acrobat," with accounts and investments in several places considered tax havens for Americans - Bermuda, the Cayman Islands and Switzerland.

The Obama campaign video also includes a clip of Romney from a CNN Republican presidential primary debate in South Carolina in January, when his GOP opponents called on him to release his tax returns. Romney is asked by the moderator of the debate, CNN Chief National Correspondent John King, if he'll follow his father's example in releasing tax returns from multiple years. Romney's response: "Maybe."

The Romney campaign calls this new wave of attacks by Team Obama an "unfounded character assault" and says they are "unseemly and disgusting."

And in an interview Monday with Radio Iowa, Romney said "I understand the president's going to try to do anything he can to divert attention from the fact that his jobs record is weak and he has no plan to make things better."

- CNN's Paul Steinhauser and Gregory Wallace contributed to this story