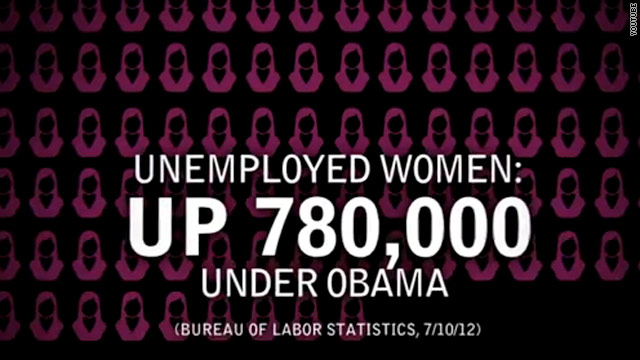 Conservatives hit back in 'war on women'

(CNN) - American Crossroads, an independent conservative group, challenged the Democratic-fueled message that Republicans have waged a "war on women," releasing a scorching web video Wednesday that turns the charge back onto Democrats.

"There is a war on women in America," a female narrator says in the ad, as words flash on the screen: "It's called the Obama economy."

The one-minute web video lists a number of statistics about poverty and women, and blames President Barack Obama for rising unemployment rates among women.

"Under President Obama, the number of women living in poverty has skyrocketed, hit hardest in every poverty related category," the narrator says.

While the video only appears online, it could soon make it to the airwaves. The group's super PAC, Crossroads GPS, has spent tens of millions of dollars to run advocacy ads in the race for the White House that are critical of the president and in support of GOP lawmakers and candidates in crucial Senate contests.

Jonathan Collegio, a spokesman for American Crossroads, said the group is testing the video in focus groups, with "an eye toward potentially creating a 30-second TV ad out of its content."

The new web ad cites a study from the National Women's Law Center saying 17 million women are now in poverty, 800,000 more than when the president took office in January 2009.

The video also argues that the poverty rate for Hispanic women is "growing faster than any other group" and that men are gaining four times as many jobs as women in the lagging economic recovery.

It further points to a Bureau of Labor Statistics report from July that says three quarters of a million more women are unemployed.

"Poverty. Unemployment. Fading hopes. That's not the change we voted for," the narrator says.

"If the president wants to talk about a war on women, let's have that debate and see how many more women are unemployed or have gone into poverty on his watch," stated a press release from American Crossroads.

Obama's campaign did not immediately respond to a request for comment on the video.

The ad marks the latest development in what's been a 2012 battle over women's issues. During the Republican presidential primary, Democrats were especially vocal in pinning the GOP presidential candidates–namely Rick Santorum and Mitt Romney–for some of their socially conservative positions.

The so-called war on women charge also stemmed from fierce Republican opposition to an Obama administration ruling that would have required religiously-affiliated institutions to include contraception coverage in health insurance plans for employees.

Many in the GOP took issue with the ruling, eventually causing such an uproar that the administration amended the policy so that insurance companies–not the institutions–would be required to cover contraception costs.

Democrats also faulted Republicans for opposing reauthorization of the Violence Against Women Act, which many in the GOP claimed had included additional provisions unnecessary for the law. The measure eventually passed the Republican-controlled House in May, though not without intense debate over the bill.

But with Election Day less than four months away, both campaigns will engage in heated competition over women voters, which make up a key voting bloc in presidential politics.

And recent polls this year again show the president with a double-digit lead over his Republican rival.

Team Romney, however, has also adopted the message that Democrats are the ones waging a "war on women."

"The real war on women has been the job losses as the result of the Obama economy," he told an audience in Wilmington, saying women had lost 92.3% of jobs lost under the Obama administration.

An analysis of federal labor statistics shows that the claim is technically true but is missing important context.

The number of non-farm employed women from January 2009, when Obama took office, to March 2012 did fall far more than the number of employed men in that period. The total job loss for the period for both men and women combined was 740,000. The number of women who lost non-farm jobs in that time span was 683,000, according to figures from the Bureau of Labor Statistics.

That amounts to 92.3% – the figure Romney cites in his campaign talking point. However, the statistic does not reflect that men constituted a much larger chunk of the job loss pie in the year leading up to Obama's inauguration.