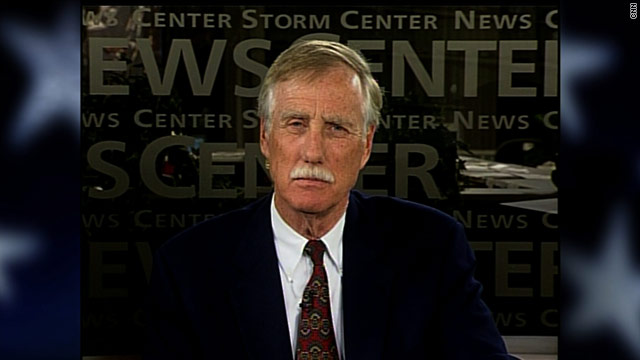 (CNN) - Former Gov. Angus King leads his rivals in the race for the U.S. Senate seat being vacated by Sen. Olympia Snowe of Maine, according to a poll released on Wednesday.

The Portland Press Herald poll puts King at 55%, with Republican Secretary of State Charlie Summers at 27% and Democratic state Sen. Cynthia Dill at 7%.

King's numbers are bolstered by significant support from un-enrolled voters (68%) who register no party preference and registered Democrats, 67% of whom support him. Only 17% of Democrats support their party's candidate, the poll showed.

Snowe shocked the political world when she announced that she would not seek a fourth term in the Senate because of "debilitating partisanship, polarization and the overall dysfunction" of the Senate.

"It's become an all or nothing proposition and that failure has eroded the public's confidence about the direction of this country and about governing institutions to be at the front lines of solving these problems," the moderate Republican told CNN in February shortly after her announcement.

King was elected to his first of two terms as governor in 1994 after anchoring a weekly news program on Maine public television for 18 years.

Summers formerly served as Snowe's state director, as well as a state senator and in Iraq and Afghanistan as a Commander in the Navy Reserve.

Dill is a lawyer and has served in the state senate since winning a special election in 2011.

President Barack Obama leads presumptive Republican candidate Mitt Romney 49% to 35%, the poll shows. Obama won the state over Sen. John McCain by 18 percentage points in the 2008 election, and Maine is listed as safely on Obama's side this year on the CNN Electoral Map.

A referendum on allowing same-sex marriage is also on the November ballot.