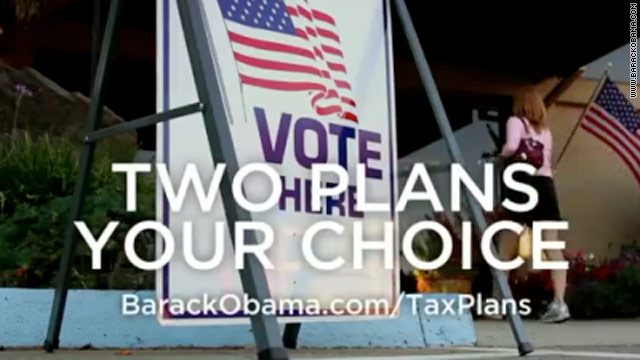 (CNN) - A new television advertisement from President Barack Obama's campaign is an attempt to secure the upper hand over Mitt Romney in a tax policy debate which Obama recently brought back to the forefront.

The ad gives a high-level overview of Obama's position on taxes and an unflattering, similarly simplistic view of Romney's proposals.

For evidence on the "working families" tax increase, the Obama campaign cites a Politifact analysis which says Romney has not publicly supported extending tax provisions aimed at low-income earners including the American Opportunity Tax Credit (an education benefit), the Earned Income Tax Credit, and the Child Tax Credit (to offset some of the cost of raising a child).

It offers a more positive view of Obama's positions on taxes.

"President Obama's plan: ask the wealthy to pay a little more so the middle class pays less, eliminate oil subsidies and tax breaks for companies that outsource," the narrator reads.

On Monday, Obama renewed calls for Congress to extend the Bush-era tax break on household income under $250,000. Many Democrats support extending the tax cut on incomes under a certain threshold, but oppose Republican's calls to extend the tax credit on income of all levels.

Their contrasting positions have led to heated political exchanges, as has Obama's support for the Buffett Rule. That proposal is supported by and named for billionaire Warren Buffett and would set a minimum tax rate for wealthy individuals.

A Republican ad buying source told CNN that Obama's campaign bought $25 million in July ad time earlier this month in the states in which this ad will air.