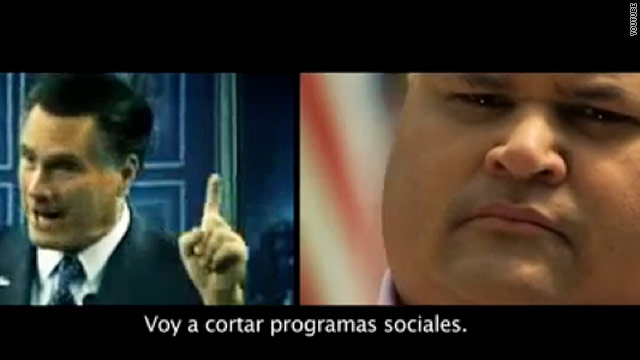 Priorities USA, a super PAC supporting President Obama, and the Service Employees International Union (SEIU) are sponsoring the ad campaign, "Mitt Romney: In His Own Words." This is the third round of Spanish-language negative ads against Romney from the pair.

The ads airing on television and radio in the three key battleground states will paint a picture of an out-of-touch multi-millionaire lacking concern for the poor and pulling funds from entitlement programs. The ads employ excerpts of Romney's most memorable gaffes on the trail.

The Colorado and Florida ads focus on Medicare and coincide with the Republican controlled House vote on Wednesday to repeal the Affordable Care Act.

The Colorado ad begins with a male voter who says: "He's a person without feelings who doesn't care about people whether they be Hispanic, Latino, white, who are below him."

Then, a female voter says: "The rest do not worry him, he only worries for himself."

Text scrolls across the screen saying, "Romney supports a plan that would end Medicare as we know it," and finishes, "Mitt Romney: His Words Say It All."

The ad shows a clip of Mitt Romney from at the Conservative Political Action Conference in February saying: "Social Security and Medicare are unsustainable."

The ad airing in Nevada takes on foreclosure in the nation's hardest hit state.

The ad begins with a clip of Romney in an interview with Las Vegas Review-Journal last year saying, "Don't try to stop the foreclosure process. Let it run its course and hit the bottom," juxtaposed to one of two Latina voters, shaking her head.

She says, "It affects us because it's the only thing we have. Where are we to live if we don't have our house?"

But the Romney campaign says Obama hasn't kept his promise to the Hispanic community. The campaign responded to Vice President Biden's comments earlier this week on Romney's support for Arizona's push for strict immigration laws and his reluctance to give more transparency to his finances, issuing this statement:

"The Hispanic community has been hit disproportionately hard in the Obama economy, with an unemployment rate of 11% and millions more Hispanics living in poverty since the Obama Administration took office. Yet Vice President Biden would rather engage in cynical and dishonest character attacks than discuss how to create jobs and promote opportunity for all Americans. Mitt Romney will take America in a new and better direction and repair the damage inflicted on our economy by President Obama's failed policies."

Priorities USA and SEIU have released two previous ad campaigns targeting the conservative front runner. In January, they targeted the former Massachusetts governor for having "two faces" and labeled him as pandering to the Latino demographic yet advocating for 'self deportation' during the Republican primary.

Responding to the ads at the time, Albert Martinez, a Romney adviser, told CNN, "Hispanics, like all Floridians, are supporting Mitt Romney because they know he has a proven record as a conservative businessman, and is the best person to rebuild the economy that President Obama has spent three and half years destroying."

The second ad campaign, released by the joint enterprise in June, attacks similar issues as the new ad set, painting a picture of the candidate as out-of-touch with the average American.