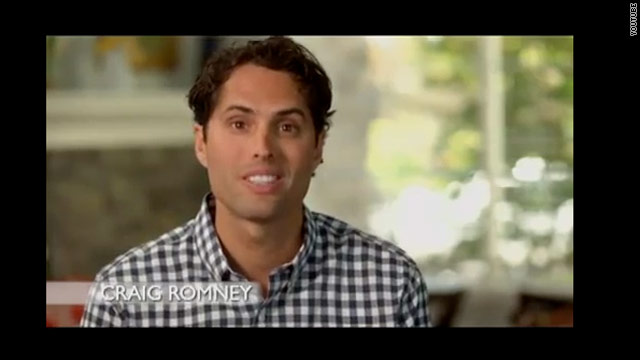 (CNN) - Mitt Romney's campaign released a new Spanish language television ad on Wednesday, featuring the candidate's son, Craig, as he urges voters to "get to know" his dad.

"I want to tell you who my father is: Mitt Romney," says Craig Romney, who's fluent in Spanish and who has narrated ads in the past.

The spot, "Los Invito (I Invite You)," features Craig talking into the camera, spliced with footage of Romney with his family and supporters on the campaign trail.

"He is a man of great convictions. He's been married for over 40 years to my mom. Together they have five sons and 18 grandchildren. He loves our country greatly," Craig says.

According to the campaign, the commercial marks its eighth Spanish language TV ad and will air in targeted markets across the country. It also coincides with the launch of a new Spanish-language website, Juntosconromney.com.

The presumptive GOP presidential nominee faces a significant gap with President Barack Obama among Latino votes. A recent USA Today/Gallup survey released July 2 indicates Romney has the backing of 26% of Hispanic voters, compared to the president at 67%.

The same poll also shows 51% of Hispanics identify as independents, while 32% call themselves Democrats and 11% say they're Republicans.

However, with the Latino population booming in the United States-especially in several important swing states such as Florida, Nevada and Colorado–Republicans acknowledge the group represents a crucial voting bloc.

In previous Spanish-language ads, including the one released Wednesday, Romney's campaign has primarily focused on the economy.

"What he has achieved has been through hard work - and it is with that same dedication that he will fight to get our country on the right track and create jobs," Craig Romney says in the new spot. ""I invite you to get to know him, and listen to his ideas."