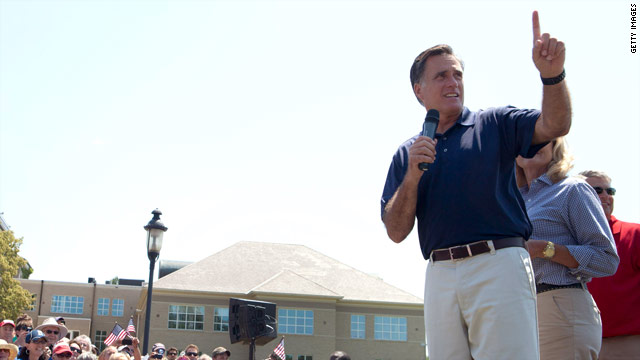 See the remarks after the jump:

You all know something of my background, and maybe you’ve wondered how any Republican ever becomes governor of Massachusetts in the first place. Well, in a state with 11 percent Republican registration, you don’t get there by just talking to Republicans. We have to make our case to every voter. We don’t count anybody out, and we sure don’t make a habit of presuming anyone’s support. Support is asked for and earned – and that’s why I’m here today. …

… I believe that if you understood who I truly am in my heart, and if it were possible to fully communicate what I believe is in the real, enduring best interest of African American families, you would vote for me for president. I want you to know that if I did not believe that my policies and my leadership would help families of color - and families of any color - more than the policies and leadership of President Obama, I would not be running for president. …

… I am running for president because I know that my policies and vision will help hundreds of millions of middle class Americans of all races, will lift people from poverty, and will help prevent people from becoming poor. My campaign is about helping the people who need help. The course the President has set has not done that – and will not do that. My course will.

When President Obama called to congratulate me on becoming the presumptive Republican nominee, he said that he, quote, “looked forward to an important and healthy debate about America’s future.” To date, I’m afraid that his campaign has taken a different course than that.
…
If someone had told us in the 1950s or 60s that a black citizen would serve as the forty-fourth president, we would have been proud and many would have been surprised. Picturing that day, we might have assumed that the American presidency would be the very last door of opportunity to be opened. Before that came to pass, every other barrier on the path to equal opportunity would surely have to come down.

Of course, it hasn’t happened quite that way. Many barriers remain. Old inequities persist. In some ways, the challenges are even more complicated than before. And across America - and even within your own ranks - there are serious, honest debates about the way forward.

Americans of every background are asking when this economy will finally recover – and you, in particular, are entitled to an answer.

If equal opportunity in America were an accomplished fact, black families could send their sons and daughters to public schools that truly offer the hope of a better life. Instead, for generations, the African-American community has been waiting and waiting for that promise to be kept. Today, black children are 17 percent of students nationwide – but they are 42 percent of the students in our worst-performing schools.
…
When it comes to education reform, candidates cannot have it both ways – talking up education reform, while indulging the same groups that are blocking reform. You can be the voice of disadvantaged public-school students, or you can be the protector of special interests like the teachers unions, but you can’t be both. I have made my choice: As president, I will be a champion of real education reform in America, and I won’t let any special interest get in the way.

I will give the parents of every low-income and special needs student the chance to choose where their child goes to school. For the first time in history, federal education funds will be linked to a student, so that parents can send their child to any public or charter school, or to a private school, where permitted. And I will make that a true choice by ensuring there are good options available to all.

Should I be elected President, I’ll lead as I did when governor. I will look for support wherever there is good will and shared conviction. I will work with you to help our children attend better schools and help our economy create good jobs with better wages.