(CNN) - Former Virginia Govs. George Allen and Tim Kaine, both candidates for a U.S. Senate seat, will face off in a debate this month moderated by CNN Chief Political Correspondent Candy Crowley.

The debate, on July 21, will take place at The Virginia Bar Association's statewide meeting in Hot Springs, Virginia.
END_OF_DOCUMENT_TOKEN_TO_BE_REPLACED

Team Obama says 1999 is the birth year of "The Big Bain Lie" and goes on to suggest that Mitt Romney might have committed a felony. 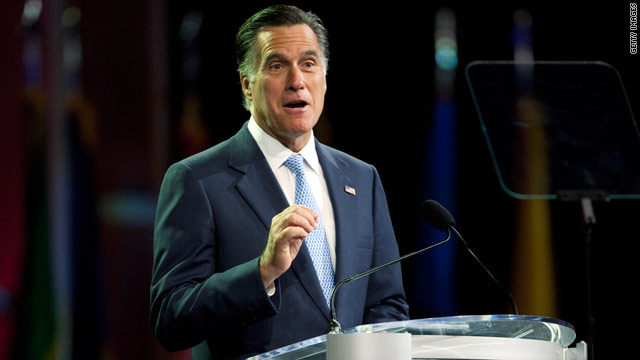 "We're getting ready to share some exciting news," Mitt Romney's campaign manager, Matt Rhoades, e-mailed supporters on Thursday. "Sometime between now and the Republican convention, Mitt will be announcing his choice for VP."
END_OF_DOCUMENT_TOKEN_TO_BE_REPLACED

Boston (CNN) – Senior advisers to Mitt Romney's campaign are calling the latest round of Bain attacks from Team Obama "an act of desperation" and "beyond the pale."

"Either they don't understand what they are talking about or they are completely reckless," a senior Romney adviser tells CNN.
END_OF_DOCUMENT_TOKEN_TO_BE_REPLACED

Vincent Gray is the latest D.C. mayor to be dogged by scandal

Washington (CNN) - Mayor Vincent Gray knew in January 2012 that members of his staff had not properly reported funds raised for his 2010 campaign, according to a source close to a federal investigation into his campaign funding.

When Jeanne Clarke Harris, a public relations consultant, told Gray in a meeting that she had not reported all the expenditures from the campaign, the mayor instructed her to report them right away, the source said. Harris pleaded guilty this week to helping orchestrate a secret campaign on Gray's behalf.

Obama on the 'mistake of my first term'

(CNN) - President Barack Obama acknowledged in a Thursday interview that he put policy ahead of messaging in his first years as president, and could be more effective at "explaining but also inspiring" if reelected to a second term.

"It's funny – when I ran, everybody said, well he can give a good speech but can he actually manage the job?" Obama said in the CBS News interview. "In my first two years, I think the notion was, 'Well, he's been juggling and managing a lot of stuff, but where's the story that tells us where he's going?' And I think that was a legitimate criticism."
END_OF_DOCUMENT_TOKEN_TO_BE_REPLACED

"His personal finances, the way he does things, his record, are fair game," Texas Republican Pete Sessions told CNN.
END_OF_DOCUMENT_TOKEN_TO_BE_REPLACED

Pelosi: Jackson should take all the time he needs

(CNN) - Rep. Jesse Jackson Jr. should take all the time he needs to get well now that his office has announced the Illinois Democrat is under treatment for a mood disorder, House Minority Leader Nancy Pelosi said Thursday.

Jackson, son of civil rights leader the Rev. Jesse Jackson, has not been on Capitol Hill since late May. In June, his office announced he was taking a leave of absence because he was suffering from a "medical condition."

(CNN) – Mitt Romney's campaign is shooting down a new Boston Globe report Thursday that claims the former private equity CEO remained at his firm, Bain Capital, for three years longer than he claims.

The newspaper points to documents filed with the Securities and Exchange Commission that state he owned 100% of the company until as late as 2002, though Romney says he left in 1999.
END_OF_DOCUMENT_TOKEN_TO_BE_REPLACED

(CNN) – Following fierce accusations from top Obama aides over Romney's tenure as head of Bain Capital, the Romney campaign fired back Thursday claiming the Obama team was being "reckless."

In a call with reporters, Stephanie Cutter, deputy campaign manager to the President, cited a Boston Globe report that Mitt Romney was in control of the private equity company he helped found three years beyond 1999 – the year the Republican candidate says he left the company to lead the Salt Lake City Olympics. She said he could face criminal consequences for misrepresenting his time at the company.
END_OF_DOCUMENT_TOKEN_TO_BE_REPLACED