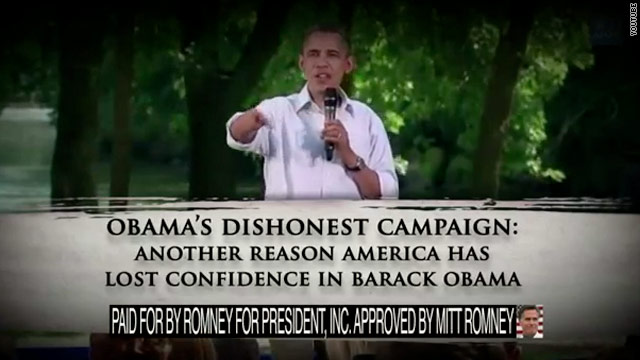 Team Romney hits back on 'outsourcing' in new ad

"When a president doesn't tell the truth, how can we trust him to lead?" the ad's male narrator says.

The 30-second spot, "No evidence," responds to one of Obama's latest slams that claims his opponent's former private equity firm, Bain Capital, in part specialized in advising companies on 'outsourcing.'

Surrogates for the Obama campaign have been hanging their argument on a Washington Post story released last month. The president himself has repeatedly mentioned the claims in his speeches on the campaign trail, pinning Romney as someone who would place the interests of CEOs over that of workers.

"Gov. Romney has experience owning companies that were called 'pioneers' in the business of outsourcing," Obama said Tuesday at a campaign stop in Cedar Rapids, Iowa. "My experience has been working with outstanding members of labor and great managers to save the American auto industry."

However, Romney's campaign in the new ad points to the independent fact-checking group, FactCheck.org, which has said there is "no evidence" that Romney was directly responsible for shipping jobs overseas while he headed the company.

Team Obama took issue with FactCheck.org's report and sent a six-page memo to counter the group's argument. It wrote that FactCheck's assessment "is not a fact at all, not by any fair reading of the record.”

The new ad also recycles a quote from then-Sen. Hillary Clinton during the 2008 Democratic primary, when Clinton fired off on Obama over her opponent's latest round of blows.

"Shame on you, Barack Obama," Clinton says in the clip.

This isn't the first time Team Romney has used Clinton in an ad. They used the same clip in a commercial two weeks, responding to similar attacks about outsourcing.

Romney's latest ad comes as Republicans and donors have been pressuring the candidate to be more aggressive in responding to attacks.

The campaign, along with the Republican National Committee, even launched a new blitz this week, turning back the 'outsourcing' charges onto Obama and faulting the president for loose trade policies that have results in the loss of jobs to markets overseas.

"If there's an outsourcer in chief, it's the President of the United States, not the guy who's running to replace him," Romney said at a campaign event Tuesday in Grand Junction, Colorado.

While Romney's campaign does not disclose ad buy locations and amounts, his team purchased almost $5 million in air time beginning Wednesday in eight battleground states. The ad buy marked the second week in a row the campaign has made a purchase of almost $5 million.