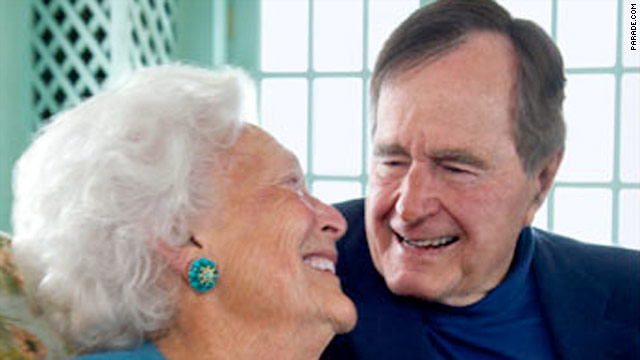 Bush 41 on tax pledges: 'Who the hell is Grover Norquist, anyway?'

(CNN) – Former President George H. W. Bush said politicians can't be "wedded to some formula by Grover Norquist" when asked about his own experience breaking the now infamous "no new taxes" pledge during his presidency.

Discussing Norquist's no new taxes "Taxpayer Protection Pledge" in a Parade Magazine cover story to be published Sunday, Bush responded with his detestation for the "rigidity of those pledges." Many Republicans have signed on to Norquist's pledge not to raise taxes, including presumptive GOP nominee, Mitt Romney. Norquist is head of the Americans for Tax Reform group and a long-time fixture in Washington as a conservative anti-tax advocate.

Bush made his pledge at the 1988 Republican National Convention when he accepted the nomination to be the Republican presidential candidate that year. After he became president, he was forced to break his pledge on a budget deal with Congress.

Bush 41 talked about the issue in an interview with presidential historian Mark Updegrove for Parade.

Bush was plagued with the broken guarantee throughout his failed reelection campaign in 1992.

Bush 41 and his wife, Barbara, stationed at their home in Kennebunkport, Maine, with their dogs Bibi and Mini-Me Bush, also offered a glimpse into his views on the current presidential race, his friendship with Bill Clinton and the partisan divide in Washington.

Upon being asked what conservatives could do to repair the damage within the party from the primary season, Bush said Republicans have already begun to rally behind Romney.

"[Mitt Romney has] been endorsed by the other candidates. That's ever thus. I mean, you're not very pleased with people who whip you verbally for months and then you turn around and you're friends. But that's the way it goes in both parties," said Bush.

Bush said he learned quite a bit from his presidential predecessor, Ronald Reagan, but was also complementary of his Democratic friend, Bill Clinton.

"Well, he knows a lot about everything. He's a very knowledgeable, bright man. He sat out here one time, and we talked about every possible [subject]-one after another," said Bush.

"But he never said a mean word about anyone. '[My] brother by another mother,' the boys call him," added Barbara of Clinton. "But he's very nice-I think he thinks of George as the father he never had. Truthfully. I mean that as a compliment. He's been very thoughtful about calling and he's a good fellow."

The Bush's also commented on his illness, vascular Parkinsonism; his son, former President George W. Bush; and high points in his presidency.