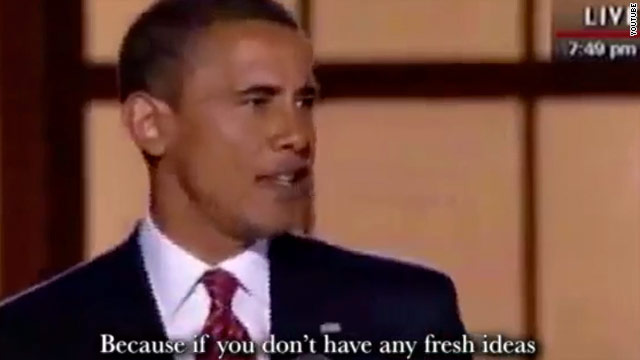 The intended point of the 30-second spot, titled "What happened?", is to fault Obama for making "dishonest" attacks in the 2012 presidential race, despite condemning such a strategy in his speech four years ago.

"Because if you don't have any fresh ideas, then you use stale tactics to scare voters," Obama said in his 2008 remarks, referring to Republican campaign tactics.

However, the ad is presented in a way that makes it look like Obama is talking about his own viewpoints, rather than those of other people.

He continues: "If you don't have a record to run on, then you paint your opponent as someone people should run from. You make a big election about small things."

The then-senator and Democratic presidential nominee was lamenting partisan gridlock and the divisive climate of American politics in his 2008 speech. He emphasized the need for Democrats and Republicans to work together, but said "I know there are those who dismiss such beliefs as happy talk."

He argued such critics, namely Republicans, are the ones who believe "you make a big election about small things" and "paint your opponent as someone people should run from."

While the ad attempts to compare Obama's former post-partisan rhetoric to his campaign's current tactics, the spot is edited in a way that leaves the impression Obama is espousing negative strategy, rather than projecting the views of his opponents.

The Romney ad also highlights a 2011 Politico story in which an unnamed Democratic strategist aligned with the White House is quoted as saying, "Unless things change and Obama can run on accomplishments, he will have to kill Romney."

And the spot points to recent Obama attacks on Romney's history at Bain Capital, his former private equity firm, hitting him as an advocate for outsourcing. Many of those claims have been debunked by a non-partisan fact-checking group and strongly contested by Romney's team.

The commercial later concludes with text on the screen: "We expect more from a president."

The new commercial comes one day after the Romney campaign released another ad accusing Obama of launching "dishonest attacks" on Romney's corporate background.

Obama's campaign maintains that Romney has been misleading about this record at Bain, including the timing of when he left the private equity firm.

"If that's the case, if he was lying to the American people, then that's a real character and trust issue that the American people need to take very seriously," deputy campaign manager Stephanie Cutter said on a conference call with reporters Thursday.

While Romney's campaign does not disclose ad buy locations and amounts, his team purchased almost $5 million in air time beginning Wednesday in eight battleground states, according to a GOP source. The ad buy marked the second week in a row the campaign has made a purchase of almost $5 million.