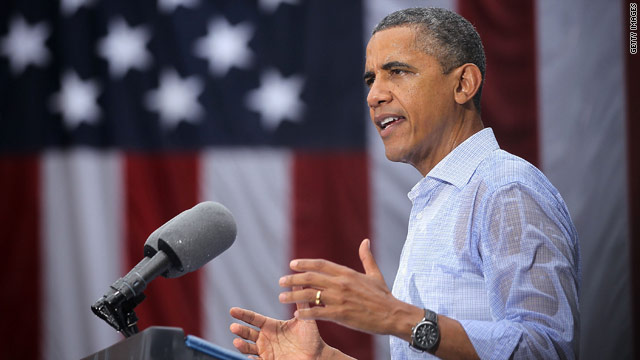 Obama doubles down after Romney suggests he apologize

"There was a report that they said that [Obama's] campaign would be based upon a strategy of trying to 'kill Romney.' And that's what they're trying to do," Romney said Friday in an interview with ABC News. "He sure as heck ought to say he's sorry for the kinds of attacks that are coming from his team. It's very disappointing on his part."

Obama stood by his criticism of Romney at the Saturday rally, including calling out Romney's experience at the financial firm he founded and led for more than a decade, Bain Capital.

"Mr. Romney has got a different idea. He invested in companies that have been called pioneers in outsourcing," Obama said. "I don't want a pioneer in outsourcing. I want some in-sourcing."

He hit Romney for a platform of "tax cuts for the wealthy, roll back regulations."

"My opponent and his allies in Congress, they believe in a top-down economics," Obama said. "They believe that if we spend trillions of dollars on tax cuts mostly for the wealthy - even if we have to pay for it by gutting education or gutting job training programs or gutting investments in basic research or turning Medicare into a voucher system or increasing middle class tax increases - that if we do that somehow all of you are going to benefit.

"But here's the problem," he continued. "We tried it for a decade before I took office. It did not work."

Romney's series of television interviews Friday evening, including one with CNN National Political Correspondent Jim Acosta, came after a week where sharp words were exchanged over Romney's personal finances and experience at Bain.

Romney responded to a particularly biting attack - that he may either be guilty of a felony or of lying to the American public - by asking in his CNN interview, "is that really what's expected from the campaign of the sitting president of the United States?"

"Is this the level that the Obama campaign is willing to stoop to? Is this up to the standards expected of the presidency of the United States," he asked. "It's disgusting; it's demeaning; it's something which I think the president should take responsibility for and stop."

"Of course the president wants to have a highbrow debate about these policy issues and what the American people actually care about. We know that Mitt Romney is leading with his business credentials as his top qualification for being president," Psaki said, adding that Obama's campaign believes it is "completely justified to raise questions... about why [Romney] had an account in Switzerland, why he had investments in the Cayman Islands, what exactly this corporation was in Bermuda."

At his rally, Obama said that his opponent will "use all those scary voices in the ads."

As for his own ads, one released Saturday morning by Team Obama has just one voice: Romney singing "America, the Beautiful" at a January campaign rally as a list of foreign countries the Obama campaign says he shipped or outsourced jobs to or stored portions of his financial portfolio ticks by.