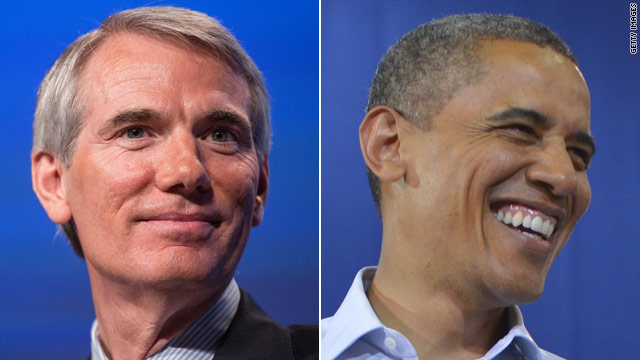 (CNN) – Sen. Rob Portman, a possible vice presidential pick for Mitt Romney, put himself in a trial-heat against President Barack Obama on Saturday, as he and Obama both talked economics and taxes in the weekly addresses.

Speaking for the Republicans, Portman - who is thought to be on Romney’s short list for the No. 2 spot – took Obama’s economic policies to task.

“Instead of focusing on growing jobs and reigniting our economy, President Obama focused on growing government and tried to remake the United States into the image of the debt-laden countries of Europe,” Portman said. “His approach has been more spending, more regulation, and higher taxes.”

“One path, pushed by Republicans in Congress and their nominee for President, says that the best way to create prosperity is to let it trickle down from the top,” he said. “I think they’re wrong. We already tried it that way for most of the last decade, and it didn’t work.

“We’re still paying for trillions of dollars in tax cuts that benefitted the wealthiest Americans more than anyone else; tax cuts that didn’t lead to the rise in wages and middle class jobs that we were promised; and that helped take us from record surpluses to record deficits,” he continued.
Obama and Portman sparred over the so-called Buffet Rule, which would set a minimum tax rate for wealthy individuals, and the extension of a Bush-era income tax cut.

The President has said the break should be extended for incomes under $250,000 and allowed to expire on income over that threshold, while many Republicans favor an extension for income of all levels.

"But even if we disagree on the tax cuts for the wealthiest Americans, we all agree that no American should pay more taxes on the first $250,000 of their income," Obama said.

"So let’s at least agree to do what we all agree on. That’s what compromise is all about," he continued, echoing recent similar comments calling on Congress to act.

Portman rebutted that point, arguing "the President is once again calling for a massive tax increase on nearly 1 million small businesses that employ tens of millions of Americans.

Portman and other Republicans are pointing to small businesses which some owners include as part of their own federal tax filings.

Obama argued that "97% of small business owners would avoid getting hit with any income tax hike whatsoever."

Portman proposed a variation on the Obama-supported Buffet Rule proposal: "Mom and pop businesses should not pay a higher tax rate than Fortune 500 corporations like Warren Buffett's."

He was formerly director of the Office of Management and Budget under President George W. Bush. Last week, he headlined fundraisers for Romney's campaign and met with staffers of the Republican presidential candidate's campaign.

Like others thought to be on Romney's list for consideration, Portman has expressed disinterest in running on Romney's ticket.

"Raising taxes on employers and the middle class, growing government at the expense of free enterprise, piling on new regulations that increase the cost of doing business, these burdens make it harder, not easier, to create jobs in America," he said, offering that "there's a better path forward."

He laid out the case against Obama and for electing Republicans - much as the vice presidential candidate would do at the Republican National Convention next month and on the campaign trail.

"There's no denying the challenges America faces today are real and they're serious. But I know we can solve them with the right policies and the right leadership," Portman said.

Obama called on Congress to act on the tax extension - which is slated to go up as part of the fiscal cliff looming in January - without unnecessary drama, the needless delays and all the partisan posturing."

Especially in the election year, however, neither party can claim it has avoided "partisan posturing."