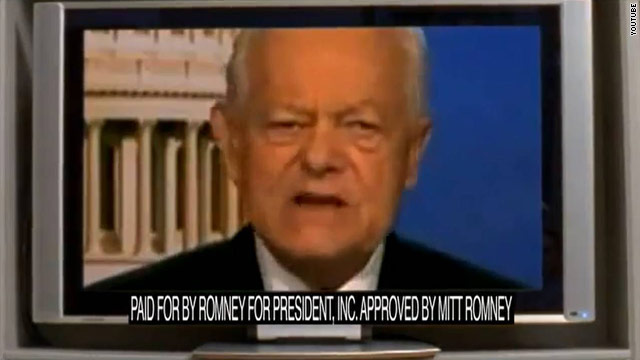 (CNN) – The latest television attack from Mitt Romney's campaign hits President Barack Obama for his 2008 campaign slogan "hope and change," using clips of television pundits wondering if that pitch has expired in the 2012 contest.

"It seems like a lifetime ago that candidate Obama was talking about hope and change. Today, after four years of broken promises, President Obama is left to simply run 'negative' and 'inaccurate' ads," read a statement accompanying the ad's release.

The spot uses clips of television personalities questioning the increasing negativity of Obama's 2012 campaign. CBS host Bob Schieffer, shown during an interview with Obama senior adviser David Axelrod, wonders in the ad: "Whatever happened to hope and change? Now it seems he's just coming right out of the box with these old-fashioned, negative ads."

On his show Sunday, Schieffer reacted to the new Romney spot, saying the campaign hadn't sought permission to use his clip.

"That was a question that I posed to David Axelrod for the president's campaign manager. I wasn't stating something there. I was asking somebody else a question," Schieffer said.

David Brooks, the New York Times columnist, also appears in the ad. He's shown saying on NBC in May: "By starting negative, by going extremely tough and extremely hard, looking conventional, and frankly running ads that are inaccurate."

And Mark Halperin, a Time magazine columnist, is shown saying on MSNBC in June: "Barack Obama's campaign and allies will run more negative ads against this Republican nominee, in 2012, than have ever been run in the history of the world."

Halperin also weighed in on clips of him being used in Romney's ad:

On CNN on Sunday, Axelrod responded to the allegation that the Obama campaign has relied too heavily on negative campaigning, saying its rivals were equally responsible for airing negative spots.

"Ninety percent of the ads that have been run by Romney and his allies since March have been negative and aimed at the president, so I think it's a mistake to say that our advertising has somehow been more negative," Axelrod said.

On Saturday, Obama's campaign released its latest negative ad, which features Romney singing "America the Beautiful" while the ad flashes the names of countries where the Obama campaign charges Romney either "shipped jobs," "outsourced," or stored portions of his financial portfolio.

The ad was the fourth in the past week from the Obama campaign.

“Mitt Romney can continue to run ads bemoaning serious questions about his career as a corporate buyout specialist, but he can’t run from his record of leading investments in companies that were ‘pioneers’ in outsourcing and investing in foreign tax havens and offshore accounts," Smith wrote. "It’s time for him to come clean about his involvement at Bain Capital from 1999 to 2002 and follow decades of precedent set by his own father and release additional tax returns."