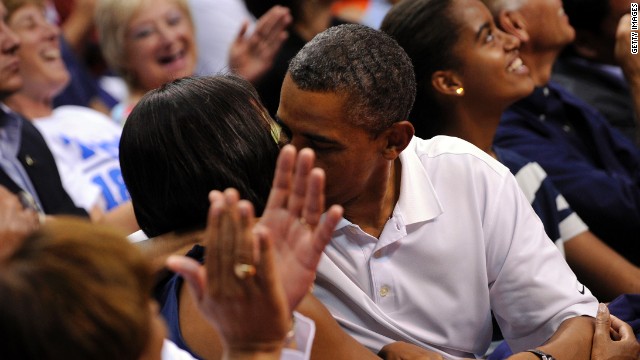 (CNN) - President Barack Obama and his wife, Michelle, found themselves Monday night in a spot where only few lovebirds have landed: the Kiss Cam at the Verizon Center in Washington.

The first couple appeared on the jumbo screen while sitting on the sidelines of the mens' USA National Team vs. Brazil basketball game.

As the crowd urged the couple to kiss, the president held his arm around the first lady and smiled, but didn't kiss - prompting a wave of boos from the crowd, according to pool reports.

But fans didn't leave entirely disappointed. Not long after the couple shied away from some affectionate display, reporters were brought back into the arena to watch as Obama and his wife re-appeared on the kiss cam, this time with the president going in for a full smooch.