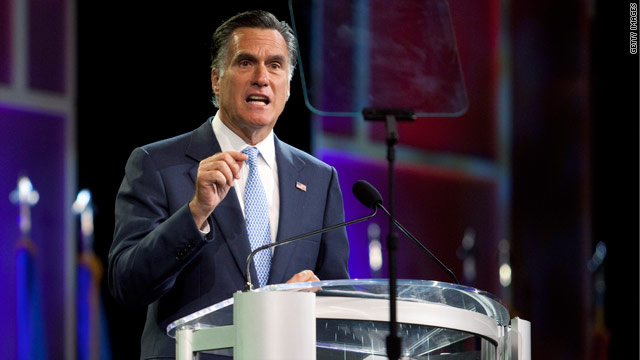 Romney called for tax transparency in past campaigns

Washington (CNN) - Mitt Romney has steadfastly refused to release more than two years of tax returns despite mounting pressure from the Obama campaign and even some fellow Republicans, who are beginning to grumble both publicly and privately that Romney should disclose more details about his income and put the nagging issue behind him.

Romney says that two years of tax returns are sufficient, and that he's fully complied with the law by revealing his full 2010 return and an estimate of 2011 tax information (he plans to make the full return public once it's finalized).

That stance is mostly consistent with Romney's position during his 2002 campaign for Massachusetts governor.

Romney's Democratic rival that year, Shannon O'Brien, released her tax information and called on Romney to do the same.

"People who run for public office are exposed to extraordinary scrutiny and that's as it should be, but there are some things that are not required for release, that are private, and I think my own income taxes, and my net worth and so forth are things I'd like to keep between myself and my family," Romney said in May 2002, according to the Boston Herald.

His longtime strategist Eric Fehrnstrom cited the family's "privacy" and noted that state law did not require candidates to provide anything more than a financial disclosure form filed with the state Ethics Commission.

But Romney has also called for greater tax transparency in the past when it served his political purposes.

In the 2002 race, Romney sought to turn Enron into a campaign issue when it was revealed that O'Brien's husband, Emmett Hayes, had lobbying ties to the scandalized energy and commodities firm.

Hayes had filed his taxes separately from O'Brien – and Fehrnstrom, then Romney's deputy campaign manager, demanded that O'Brien come clean about her husband's financial ties to Enron.

"Her hands aren't clean," Fehrnstrom said, according to the Herald. "She can't claim to be disclosing anything until she discloses the returns of her husband, the Enron lobbyist. Under Shannon O'Brien, the state Pension Board lost millions by buying Enron stock when it was collapsing - what is she hiding?"

Fehrnstrom made the demand even as Romney was refusing to release his own returns.

That drew accusations of hypocrisy from editorial boards, but Fehrnstrom defended the campaign's posture, saying that O'Brien was trying to hide important information from voters by declining to reveal her husband's returns, while Romney was simply acting on principle.

The tax return issue also made an appearance in Romney's first political campaign, his 1994 Senate run against Ted Kennedy.

In that race, Romney assumed the role of transparency advocate.

"It's time the biggest-taxing senator in Washington shows the people of Massachusetts how much he pays in taxes," Romney said in April of 1994, according to a report in the Boston Globe.

Romney said he would release his own tax returns if Kennedy did, but the Senator refused - and so Romney did as well.