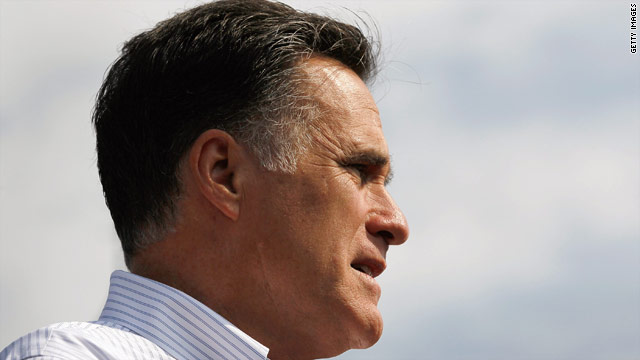 (CNN) – Mitt Romney's campaign rolled out a new attack on President Barack Obama Monday, hitting the Democrat for making governing decisions that lined the pockets of contributors to his political campaign.

Romney himself hit Obama for what he described as a record of political cronyism in an interview Monday morning, and his campaign followed suit with a conference call and a web video following similar lines of attack.

"There is no question that when billions upon billions are given by the Obama administration to the businesses and campaign contractors, that is a real problem, particularly at a time when the middle class is really suffering in the country," Romney said on Fox News.

"It is a tough time for America. If you are a campaign contributor to Obama, you stand to get millions in cash from the government. I think it's wrong. I think it stinks to high heaven and I think the administration has to explain how it is they would consider giving money to campaign contributors' businesses," Romney said.

Ed Gillespie, a senior adviser to Romney, first issued the "crony" line of attack on Obama on CNN's "State of the Union" Sunday, pointing to a discrepancy between middle class Americans and Obama's donors.

"If you're a political donor to Barack Obama you're going to do fine, because you're going to get a payoff," Gillespie told CNN Chief Political Correspondent Candy Crowley. "If you're a middle class worker you're in jeopardy. You're facing a layoff. That's the kind of economy we're seeing with President Obama. His buddies do well, political supporters do well, they get green jobs, money, and they get stimulus dollars. If you're a middle class worker, you're struggling right now."

In their attack, Romney's team points to reports that high-level contributors to Obama's 2008 presidential campaigns won spots on advisory boards that distributed government loans to energy companies, as well as a report that a high level donor was put in charge of hiring in the Obama White House.

The Romney campaign's new focus on Obama's record comes after a week of bitter back-and-forth over the Republican's departure from Bain Capital, the private equity firm Romney founded and ran before heading the 2002 Salt Lake City Olympics. Democrats last week seized upon newspaper reports that Romney was listed as Bain Capital's CEO after 1999, when he has repeatedly said he left the private equity firm.

The significance of Romney's date of departure centers on companies acquired by Bain that later shipped jobs overseas. Romney claims he left the company before those decisions were made, but Democrats point to filings with the Securities and Exchange Commission that indicate Romney was still listed as the firm's CEO.

Romney has also been batting back calls to release additional income tax returns. He says the two years of information he's already disclosed more than fulfill his legal obligation, but Democrats say more returns would answer questions about offshore accounts.

On Saturday, Obama's campaign released a television ad featuring Romney singing "America the Beautiful" while the graphics flash the names of countries where the Obama campaign charges Romney either "shipped jobs," "outsourced," or stored portions of his financial portfolio.

A new video released Monday by Romney's campaign flipped the formula, using a clip of Obama singing the Al Green lyrics "I'm so in love with you" to suggest that Obama only had "Lots Of Love For The Donor Class."

And on a conference call, Gillespie labeled Obama's style of governing "Chicago-style politics."

"People have seen these reports over the course of the past three and a half years, there's been many news accounts of these different examples of President Obama's supporters and friends getting benefits form these political decisions about taxpayers' dollars that have ended up being wasted, but it's not been put in one place for people to kind of see the pattern and to see the underlying approach here, which is essentially Chicago-style politics and Chicago-style economics," Gillespie said.

Obama campaign press secretary Jen Psaki responded to the "crony" charges on Air Force One Monday as Obama flew to an event in Ohio.

"President Obama has set a bar of transparency that Mitt Romney has not met, cannot possibly meet, even on his tippy-toes," Psaki said. "We have released bundlers, we release people regularly who visit the White House. We release far more than Mitt Romney has come close to."

"These are old, tired, haggard attacks," Psaki continued, adding that Romney's campaign is attempting to "change the conversation becaiuse he doesn't want to answer questions about his time at Bain Capital."