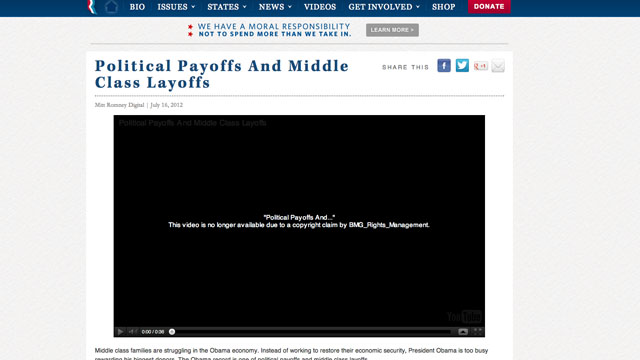 (CNN) - A web video posted by Mitt Romney's campaign on Monday was taken off YouTube later that same day.

Those wanting to click on the video were instead met with a message that read: "This video is no longer available due to a copyright claim by BMG_Rights_Management."

It was part of a new line of attack Team Romney launched Monday, suggesting Obama made decisions in office that helped his top political donors.

Responding to the YouTube take-down, Romney's campaign said they were prepared to defend the video.

"Our use was 100% proper, under fair use, and we plan to defend ourselves," a campaign official said.

This particular video came in direct response to a television ad released by the Obama campaign on Saturday. It featured Romney singing "America the Beautiful" while graphics flash the names of countries where the Obama campaign charges Romney either "shipped jobs," "outsourced," or stored portions of his financial portfolio.