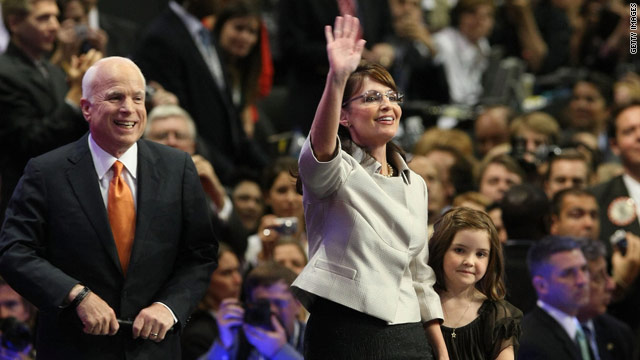 JUST IN:  Sen. John McCain issued a statement this afternoon explaining why he chose Sarah Palin over Mitt Romney to be his running mate in 2008. In doing so, McCain continued to defend Romney from criticism about the presumptive GOP nominee’s refusal to release his tax returns. “Some in the media have chosen to take my answer today, in response to the question of why I did not select Governor Romney as my vice presidential nominee, out of context. I selected Sarah Palin because she was the best fit for my campaign, and my decision had nothing to do with the bogus tax return attacks currently being waged by the Obama campaign. I have the highest respect for Governor Romney and his record of public service, and he will make an outstanding president.” See McCain’s original statement below in the Trail Moments section.


the LEDE
Did you miss it?

Leading CNNPolitics: Romney risks playing running mate hand too early
Mitt Romney has a reputation for pragmatism, deliberation and playing it safe. But if Romney reveals his vice presidential pick this week, as the latest round of campaign chatter suggests, he'll be throwing out the traditional campaign playbook that says a running mate should be announced around a national party convention for maximum impact, just as voters are starting to pay attention to the campaign. – Peter Hamby

Leading HuffPo: Romney Backer Snaps: Obama Should 'Learn How To Be An American'
In the span of one morning, top Mitt Romney surrogate John Sununu referred to President Obama as dumb and stupid, called the Chicago political culture from which he came "corrupt," brought up Obama's admitted use of marijuana as a kid in Hawaii, resurfaced the name of Tony Rezko - the jailed financier with ties to Obama - and then questioned the president's Americanness. – Luke Johnson LINK

Leading Politico: New high (or low) in campaign snark
President Barack Obama and Mitt Romney opine about wanting a high-minded campaign — but the race the two men are actually running is marked by an increasingly personal and vicious tone that may well define the 2012 presidential election. – Reid J. Epstein LINK

Leading The New York Times: Inside Romney’s Search for a Vice President
As Mitt Romney prepares to unveil his vice-presidential selection, interviews with those inside and outside the campaign offered a glimpse into the scope of the three-month process. – Ashley Parker and Michael Barbaro LINK

What was billed as a routine campaign conference call today turned out to throw a wrench in the news cycle.

Mitt Romney’s National Campaign Co-Chair John H. Sununu started out talking about the economy under President Obama, and then turned a dagger.

“The men and women all over America who have worked hard to build their businesses from the ground up is how our economy became the envy of the world,” said Sununu, a former New Hampshire governor. “It is the American way, and I wish this president would learn how to be an American.”

Sununu, a former White House chief of staff, knows how to throw a punch. This one, though, seemed a tad off color for the man more known for the glint in his eye than questioning the patriotism of the president of the United States.

Timing is everything in politics, and the Romney campaign notably needed to change the subject from the blistering attacks on both Romney’s record at Bain and the presumptive GOP nominee’s reluctance to release his entire litany of tax returns (something that even friendly Republicans have told him to do in recent days).

Obama for America’s Lis Smith, told CNN’s Jim Acosta: "The Romney campaign has officially gone off the deep end. … This meltdown and over-the-top rhetoric won't make things better- it only calls attention to how desperate they are to change the conversation."

We debated today whether Gut Check should give Sununu any attention for making an outrageous statement. We decided we shouldn’t let a former three-term governor, business leader, elder GOP statesman and former White House chief of staff question a sitting president’s Americanism with impunity.

After all, Sununu on another Romney campaign conference call earlier this cycle dissed then-rival candidate Rick Santorum, “I can tell you one of the most important things you need in a president is self-control and discipline. … Rick Santorum's outbursts in the last few days, in my opinion, disqualified him on that aspect. He has a tendency to speak before he thinks.”

Gut Check Tune In Alert: Sununu is Wolf Blitzer's guest on "The Situation Room" tonight. You can watch him defend his comments on CNN and let us know what you think: gutcheck@cnn.com or via Twitter @gutcheckcnn.

- Romney, Sharp New Attack:  Obama is Changing Nature of America -
MITT ROMNEY SPEAKING IN IRWIN, PENNSYLVANIA:  “This is very different by the way than the Democratic party of Bill Clinton, that said that the era of big government was over. That reformed welfare—you heard that story by the way—he is trying to take work out of welfare requirement. It is changing the nature of America, changing the nature of what Democrats have fought for and Republicans have fought for. In the past people of both parties understood that encouraging achievement, encouraging success, encouraging people to lift themselves as high as they can, encouraging entrepreneurs, celebrating success instead of attacking it and denigrating it makes America strong. That’s the right course for this country. His course is extraordinarily foreign.”  Full Story

- Romney: My campaign is not modeled on Bain -
MITT ROMNEY IN AN INTERVIEW WITH NATIONAL REVIEW ONLINE: “The 25 years I spent in business gave me an understanding of how business decisions are made, as well as an understanding about the actions that are destructive to job creation and the actions that encourage job creation. I’ve watched this president, and his policies have made it harder to create jobs. His economic philosophy, shockingly revealed in his comment a day or so ago, is the reason why he has been so unsuccessful in reigniting economic growth. ... Bain Capital was a firm that I led for 14 or 15 years, and Bain Consulting was an enterprise I led for two years as CEO. Our campaign is not modeled after either group.”

- Gingrich-Palin 2016? -
LAURA INGRAHAM ASKS NEWT GINGRICH IF HE AND SARAH PALIN SHOULD SPEAK AT THE RNC CONVENTION: "Governor Palin absolutely should have a speaking slot. She motivates and arouses an entire base and she is just - I think she absolutely should have a speaking slot. … I’m glad to do it if they want me to. I seem to make noise ... but I do think I would strongly support Governor Palin being given a chance to speak to the country and I think she'd be very effective.”

- Swing state votes count -
IN AN INTERVIEW WITH WEWS-TV, OBAMA IS ASKED IF REGULAR OHIO CAMPAIGN STOPS IS TO ESTABLISH RESIDENCY FOR VOTING PURPOSES: “I probably don’t need to vote in Chicago as much as I do in Ohio, but I am not going to take advantage of this loophole. I am going to try to make sure to win it straight.”

- Palin was better than Romney -
SEN. JOHN MCCAIN TO POLITICO ON WHY HE CHOSE ALASKA GOV. SARAH PALIN OVER MITT ROMNEY IN 2008: "Oh come on, because we thought that Sarah Palin was the better candidate. Why did we not take [Tim] Pawlenty, why did we not take any of the other 10 other people. Why didn’t I? Because we had a better candidate, the same way with all the others. ... Come on, why? That’s a stupid question."

- A Stark assessment of Olympic uniforms -
REP. PETE STARK ISSUES A STATEMENT AFTER MEMBERS OF CONGRESS SENT A LETTER TO THE U.S. OLYMPIC COMMITTEE: “We don't outsource the athletes who represent the United States in the Olympics and we shouldn't outsource the manufacturing of Team USA's uniforms. The fact that our American uniforms were made in China is a glaring reminder that we've gotten away from a core value: our country's success is built on the innovation and industriousness of the American worker. When we deviate from that, we fail. That is why we're calling on the U.S. Olympic Committee to reflect these values and ensure that Team USA's uniforms are made in America."


TOP TWEETS
What stopped us in 140 characters or less

Rep. Henry B. Gonzalez was elected to the House of Representatives in a 1961 special election and was re-elected 18 times, making him the longest-serving Hispanic member of Congress, according to the Library of Congress. The Texas Democrat was chairman of the House committee created to investigate the assassinations of John F. Kennedy and Martin Luther King Jr. When a state legislator, Gonzalez and a colleague held the longest filibuster to date in Texas history, according to the Library of Congress - although that record has since been surpassed.


GOT NEWS?
Our inbox awaits: gutcheck@cnn.com

Tips or comments? Send them to Michelle; send complaints to Preston, because he is already in a bad mood. We also want to give a shout out to Dan Merica, who runs our Twitter account @gutCheckCNN and enriches this product every single day.